1960 Cypress is a mature neighborhood in North Houston home to several master-planned communities and subdivisions.

The Farm-To-Market Road 1960 or Cypress Creek Parkway runs throughout the community, and I-45 borders it to the east making for a comfortable drive and commute to key Houston areas. 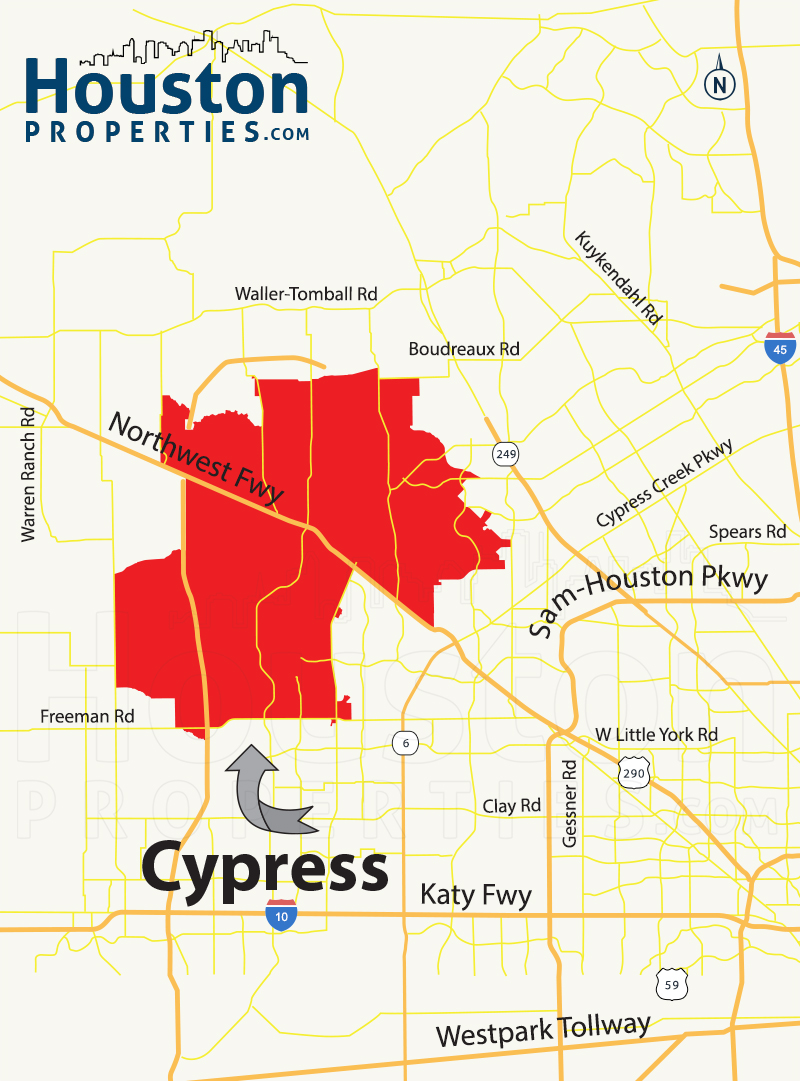 With the number of subdivisions and communities in the area and its location along the floodplains, 1960 Cypress real estate can be tricky to navigate. Buyers can benefit from the assistance of a top Houston realtor familiar with the area.

Don’t see what you like?Get a custom list of the best homes for sale in Best Value Homes Under $400k

1960 Cypress is a mature neighborhood with several master-planned communities and subdivisions located 22 miles southwest of Downtown Houston. Neighborhoods in the area feature a healthy mix of affordable and high-end homes, including Ponderosa Forest hailed as the “River Oaks of North Houston”.

Similar to the Best Golf Course Communities in Houston, 1960 Cypress features its own golf courses and country clubs. The Northgate Forest Country Club offers 24 holes of championship golf as well as tennis courts and swimming pools. The world-class golf courses and shopping centers of The Woodlands are also a short drive away.

1960 Cypress homes are located nearby Houston’s major roads and thoroughfares with Interstate 45 along its eastern borders, and FM 1960 or Cypress Creek Parkway running throughout the area. A bus line also runs along FM 1960 making for an easy commute to downtown and the ExxonMobil Campus.

1960 Cypress homes are zoned to some of Houston’s Best Schools and school districts. The neighborhood is zoned to the award-winning Spring, Cypress-Fairbanks, Aldine, and Klein ISDs.

Homes in the area are done in several architectural styles such as traditional, French, Mediterranean, colonial, and contemporary and modern designs.

Most subdivisions enforce deed restrictions with homes set back on large wooded lots ranging from 6,000 up to more than 30,000 square feet.

Students in the area may attend several award-winning blue-ribbons schools. The list includes Danish Elementary School, Arnold Middle School, and Cy-Fair High School. All schools have a 4 of 4 Performance Index Rating and no less than 7 rating (out of 10) from GreatSchools.Org.

*Note: For a more detailed guide to schools zoned to 1960 Cypress homes, check our Houston’s Best Schools OR email me at [email protected].

Paige works with a tremendous number of buyers and sellers within 1960 Cypress, earning praises like “Paige Martin is the best 1960 Cypress realtor I know.” Read more about client feedback and ratings here.