One of the top-selling communities in the nation, Aliana is a bustling new construction master-planned neighborhood in Fort Bend County.

Ranked 17th in John Burns Real Estate Consulting’s Top 20 Master-Planned Communities in the Nation and 19th in consulting firm RCLCO’s list, Aliana is a popular option, thanks to its great selection of homes, easy accessibility, and excellent amenities.

Aliana is popular for its: 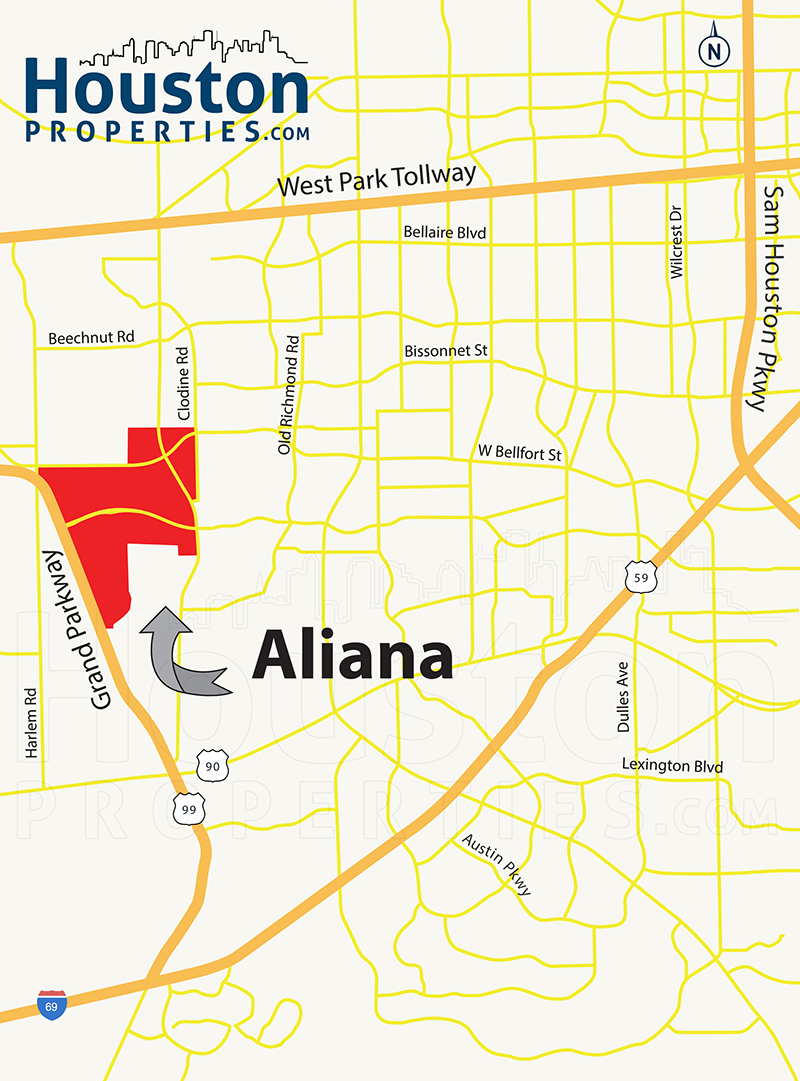 Aliana real estate can be challenging to navigate due to the number of home builders in the community, some far superior than others.

Contact Paige Martin, one of Houston’s Best Realtors and one of Aliana’s most active real estate agents, if you’re looking to buy or sell a home in Aliana.

For any inquiries about Aliana homes recommendations, or off-market MLS listings, get in touch with Paige Martin, head of the Houston Properties Team and one of the best realtors in Houston.

Don’t see what you like?Get a custom list of the best homes for sale in Aliana

Get help from Aliana’s #1 Rated Realtor

Covering a 2,000-acre area in Fort Bend County, Aliana is a new construction master-planned community that broke ground in 2007.

Nestled east of Grand Parkway, Aliana is about 6 miles northwest of Sugar Land. The community originally broke ground sometime in 2007, but the original master plan was reworked later to better suit demand.

Aliana also features a section for commercial establishments. The 38-acre tract along Grand Parkway and Harlem Road is under development as the Market Place at Aliana, projected to have over 400,000 square feet of retail space.

Residents also have easy access to the Club at Aliana and the Westmoor Club, the community’s two resort-style rec centers.

Aliana homes have Richmond addresses, and are within Fort Bend County, one of the wealthiest and fastest growing counties in the U.S.

The master-planned community is minutes away from main thoroughfares. Grand Parkway connects residents to Westpark Tollway and US 90 Alt. W Airport Boulevard winds through the community, connecting east of Texas 6 and Interstate 69. FM 1464 and Harlem Road are also nearby.

Carolyn and Vernon Madden Elementary School is located within the community.

The following are some of the more notable private schools in and around Aliana.

To find an updated listing of all Aliana real estate zoned to any specific public school, please send an email to Paige Martin at [email protected] with the property preference and budget that you’re working with.

Aliana is one of the top-selling master-planned communities in the nation, ranking 17th in John Burns Real Estate Consulting’s list in 2016.

Aliana real estate continues to be a popular option, thanks to the number of developers offering homes in the neighborhood and the community’s resort-style amenities and great location off Grand Parkway.

Thanks to the community’s popularity, sales remain brisk with the average price for Aliana homes for sale at just over $450,000.

There are a number of developers that offer homes in Aliana, each offering a variety of floor plans and designs. The community is mostly made up of single-family homes, ranging from waterfront estates to homes in gated communities.

Luxury estates and custom-built homes are also available in Aliana. Most are newly constructed.

Upon completion, the community will feature over 4,000 homes.

Aliana homes typically feature 4- to 5-bedroom floor plans. Living spaces range from 2,000 to over 5,000 square feet. One- and two-story homes are available in the community.

Architectural styles can range from traditional to more modern/contemporary designs. Most Aliana homes feature brick and wood or stone and stucco exteriors.

Aliana is mostly made up of single-family homes and there currently aren’t any townhomes available in the community. Other master-planned communities in the west and southwest Houston areas feature a few townhome options, including Cross Creek Ranch, Cinco Ranch, and Riverstone.

There are no Aliana condos for sale at the moment, though there are some units within mid-rise residential buildings in nearby Sugar Land. For more options, the Galleria and Medical Center areas feature plenty of luxury condos and loft options.

An International Polo Club was also slated for the community, with plans for a championship field and two standard fields. This, however, was scrapped when the development was revamped in 2010.

The reworked plan also did away with the hotel, offices, and town center. Street layouts were also changed from grids to curves.

Aliana has since received numerous awards, including the Texas Association of Builders’ Developer of the Year and the National Home Builders’ Gold Award.

Fun Things To Do Near Aliana

Like most master-planned communities in Fort Bend County, Aliana features a number of amenities for its residents to enjoy. The community features two recreation centers: The Club at Aliana & Swim Center and The Westmoor Club at Aliana.

The Club at Aliana, located at the corner of FM 1464 and W Belfort Blvd, features a swim center (with a super slide and an activities pool, a tennis court, and a clubhouse. The clubhouse offers a fitness center, a catering kitchen, two party rooms, a ballroom, and a covered patio.

The Westmoor Club, nestled along Westmoor Drive, on the other hand offers rooms/spaces available for rent, a community pool and splash pad, an event lawn, tennis courts, a 24-hour fitness center, and a playground. The club also offers a game room where residents can play arcade basketball, foosball, and ping pong.

Aliana residents also have easy access to the trails that wind around the community.

Aliana’s master plan also sets aside the areas along Grand Parkway for commercial use. The Market Place at Aliana (also known as the Aliana Shopping Center) is nestled along Grand Parkway and Harlem Road. The retail center covers around 38 acres and features over 400,000 square feet of retail space. It has Target and H-E-B as anchor stores.

Golf enthusiasts are minutes away from a number of courses and clubs, including Black Hawk Country Club (formerly the Houstonian Golf Club) and Shadow Hawk Golf Club. Both cover the 200-acre area directly south of Aliana and feature Rees Jones-designed golf courses.

Here are some of Aliana’s must-visit places: