Nestled adjacent to Memorial Park, Camp Logan is a historic and thriving community made up of single-family homes and attached townhomes west of Downtown Houston.

Formerly an army bootcamp, Camp Logan is a residential community made up of around 240 homes. The neighborhood is known for for its tree-lined streets and winding roads. Residents enjoy:

Buying or selling a home in Camp Logan can be tricky. Some homes’ proximity to busy roads (Memorial and Westcott) can affect resale values due to noise or traffic issues. Older homes in the area may need some work (renovations). For help in navigating this tricky market, contact Paige Martin, one of Houston’s Best Realtors and one of Camp Logan’s most active real estate agents. 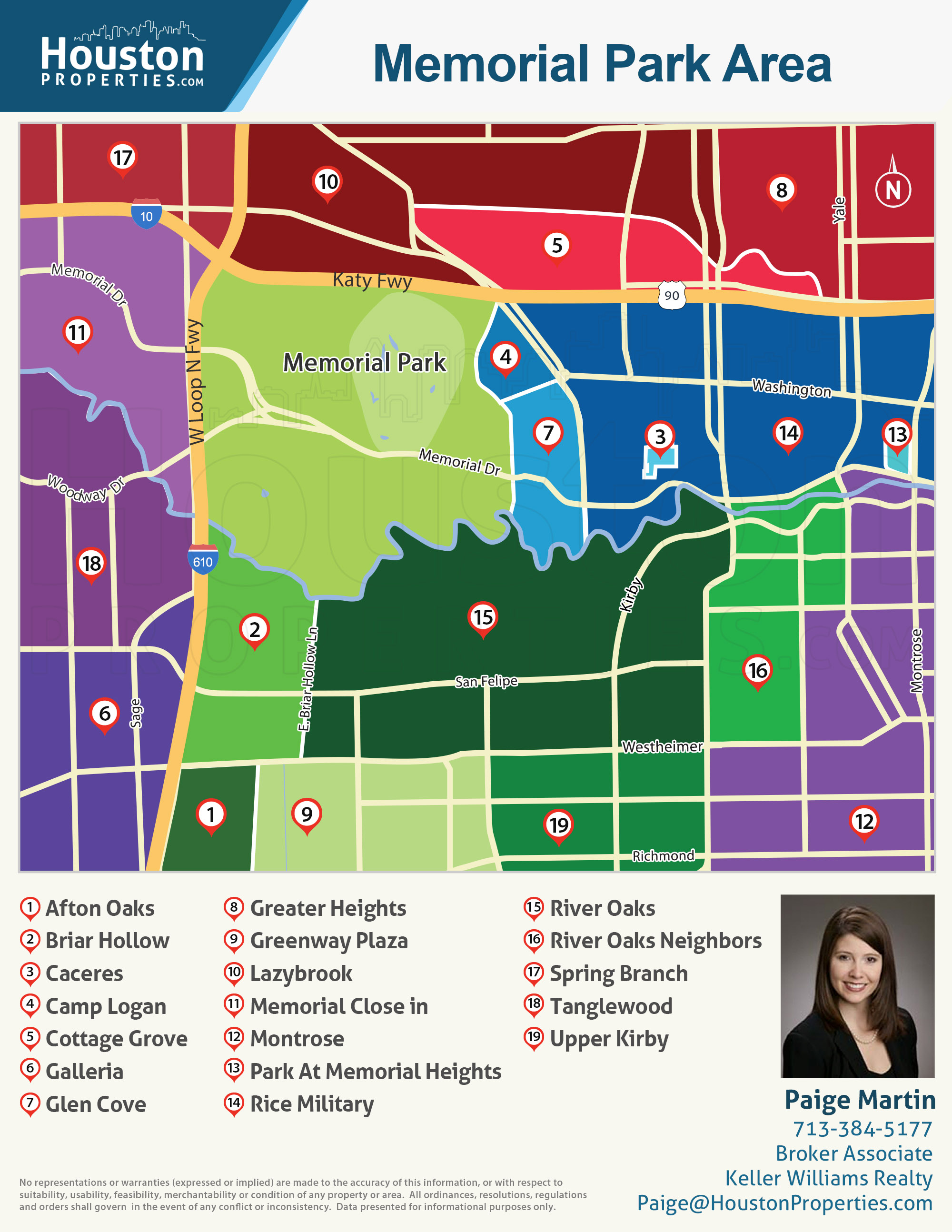 Don’t see what you like?Get a custom list of the best homes for sale in Camp Logan

Located next to Memorial Park and two of Houston’s most expensive neighborhoods, Camp Logan is a quiet residential community prized for its central location, great accessibility, and relatively affordable homes.

Home to around 240 homes, Camp Logan is bordered by Memorial Park to the west, Arnot Street to the south, and Westcott Street to the east. It sits just north of Memorial Elementary School.

Camp Logan is north of the Glen Cove/Crestwood subdivisions, two of the most expensive neighborhoods in Houston.

Conveniently located just off Katy Freeway (Interstate 10) and Memorial Drive, the neighborhood is an easy jump off point to several key districts, including downtown, the Texas Medical Center, and the Galleria.

An oak tree that predates the Texas Republic serves as the neighborhood’s landmark.

Camp Logan has a triangular street pattern with winding, tree-lined roads. With Memorial Park at its western border and the Washington Avenue Corridor/Rice Military area to the east, the community has an element of serenity amid a bustling urban area.

The community is attractive to homebuyers who are in the market for locations close to the Gallera/Uptown area, or with easy commutes to the Med Center and Downtown Houston.

Camp Logan Houston is within the 77007 Harris County zip code. 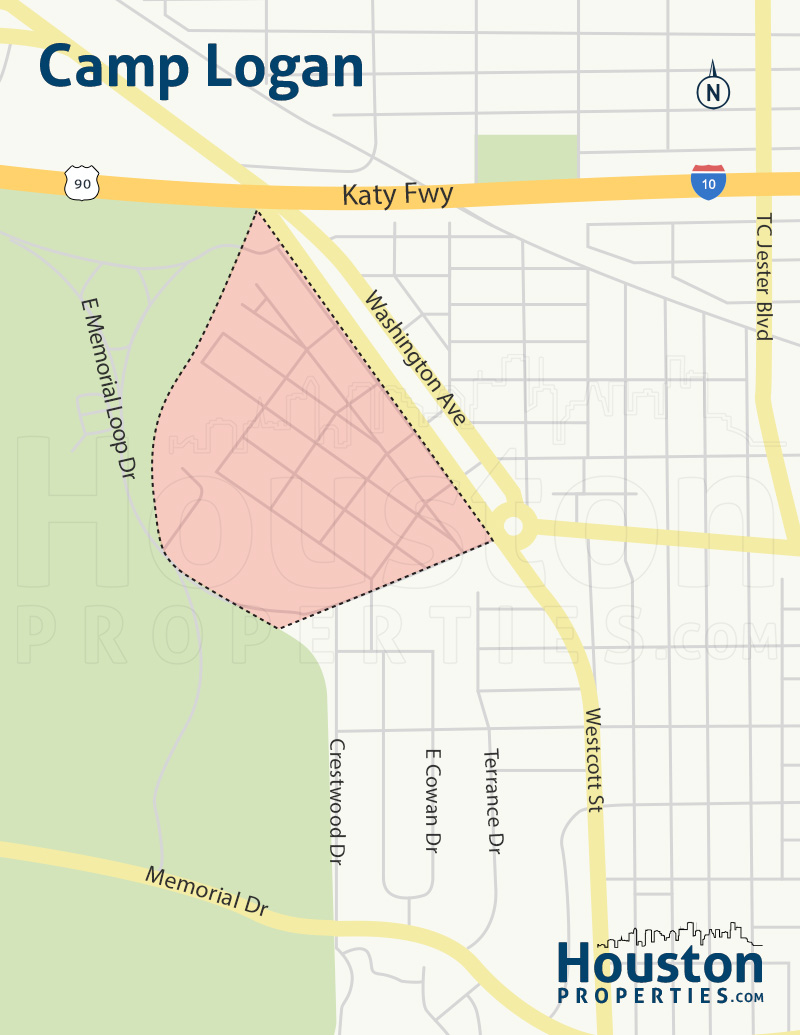 Most of the residents send their children to the exemplary private schools nearby.

To find an updated listing of all Camp Logan real estate zoned to any specific public school, please send an email to Paige Martin at [email protected] with the property preference and budget that you’re working with.

Camp Logan properties have experienced steady and continuous appreciation in the last 10 years, with median sales prices peaking at over $750,000.

Townhomes have become quite popular in the area, and compared to nearby Glen Cove and Crestwood, Camp Logan homes are more affordable (and typically sit on smaller lots). Median sales prices in the said communities are at over $1,500,000 and $2,000,000, respectively.

The median square footage is 2,394 square feet, and though this is a slightly smaller than in other Inner Loop neighborhoods, single-family homes in this area feature multi-level construction and second-floor living.

Camp Logan townhomes, spurred by a trend of multi-level construction in the area, feature front and backyards, decks, balconies, and patios. The standard floor plan includes 3 bedrooms and 3 and a half baths spread across two to four stories of living space.

Like single-family homes, townhomes are highly accessible in the Camp Logan area. Both housing types also share the same style sensibilities, though townhomes are slightly cheaper to buy and easy to maintain.

Nearby townhome communities include:

There are no high rise condos in Camp Logan, but there are condo units available in mid-rise or multi-level townhouses.

Like most areas in Houston, Camp Logan played an integral role in the city’s rich history.

In 1917, shortly after the United States had declared war on Germany, the War Department commissioned two military camps to be built in Harris County. Camp John A. Logan, along with Ellington Field, was constructed in 1917-1918 and served as a training facility for the US Army. It was named after the founder of Memorial Day and was made on a 1,400-acre land, just three and a half miles from downtown Houston. It prepared over 30,000 soldiers for service during World War I.

The Third Battalion of the black Twenty-fourth United States Infantry Regiment was assigned to guard the then under-construction Camp Logan.

In 1918, Camp Logan was turned into military hospital and a golf course – the first one in Houston – was built for the recovering servicemen. The next year, the camp was decommissioned and closed.

Enterprising brothers, Mike and Will Hogg, bought 875 acres of Camp Logan, along with an adjoining property from the family of businessman William Marsh Rice.

They had planned to develop home sites on the property, but decided instead to focus their investments somewhere else. The brothers eventually sold the property to the city of Houston, and it was turned into a park dedicated to the memory of soldiers who died serving in World War I, now known as Memorial Park.

Today, some remnants of its history still remain – chunks of concrete, a shelled-road leading to the golf course, and trenches used for training.

Fun Things To Do Near Camp Logan Houston

Camp Logan community has deed restrictions that prevent construction of commercial establishments inside the neighborhood.

Residents of the community enjoy close proximity to Memorial Park, Houston’s largest public park – and one of the largest urban parks in the country (at 1,400+ acres). The park offers venues for various outdoor activities like swimming, tennis, softball, volleyball, croquet, skating, cycling, and track.

Many Houstonians frequent the Seymour Lieberman Exercise Trail, a three-mile jogging trail made of crushed granite that courses through Memorial Park and Camp Logan.

Another popular destination is the Memorial Park Golf Course, a top rated municipal golf course with a 73 rating and slope rating of 122 that is easily accessible for those who reside in the Camp Logan neighborhood.

Memorial Park is also home to the Houston Arboretum and Nature Park, a nature sanctuary that provides nature educational facilities for children.

Hikers, bike enthusiasts, in-line skaters, and roller skaters can take advantage of the Memorial Park Picnic Loop, a multi-use trail open during park hours. There are several trails available both for bikers and hikers as well.

Camp Logan is also near the dining and commercial establishments along the Washington Corridor, while shopping destinations like the Galleria are highly accessible. Other commercial, entertainment, and cultural hubs are only a short drive away.

Here are some of Camp Logan Houston must-visit places: