The neighborhood is popular for its beautifully updated homes from the 70s and 80s, its tree-lined, wandering streets, and its central location and high accessibility.

Facilities for golf and other outdoor activities are also abundant in and around the neighborhood.

Shopping centers along the FM 1960 including the Willowbrook Mall, Willow Center, and Champions Village are minutes away from Champion Forest.

Champion Forest is best known for its great access to premiere and exclusive golf courses and country clubs. The Raveneaux Country Club is located within the community, while the premiere tournament-level Champions Golf Club is a stone’s throw away from the neighborhood.

Champion Forest is zoned to the Klein ISD, and students in the neighborhood attend Brill Elementary, Kleb Intermediate, and Klein High School.

Thanks to several civic clubs and an active homeowners association, Champion Forest has managed to maintain its idyllic atmosphere, making it an ideal neighborhood for families and professionals alike.

Contact Paige Martin, head of the Houston Properties Team & Broker Associate at Paige@HoustonProperties.com or 713-384-5177 for advice or questions about buying or selling a Champion Forest townhome.

For more information on available Champion Forest homes for sale under $500K call Paige Martin at 713-384-5177 or email Paige@HoustonProperties.com

Don’t see what you like?Get a custom list of the best homes for sale in Champions Area

Located approximately 26 miles northwest of Downtown Houston, Champion Forest is a quaint, deed-restricted neighborhood. It is one of the affluent, golf-centered communities that make up the Champions area.

Indirectly named for the premiere tournament-level Champions Golf Club, Champion Forest is highly popular for its proximity of country clubs, activity centers, and retail hubs. Schools, parks, stores, restaurants, cafes, and other entertainment centers are also within a short drive away from Champion Forest homes.

Developed in the 1970s, the neighborhood still features a majority of its original homes. Deed restrictions have kept the community’s overall look and feel – one- and two-story traditional homes on large lots sit along the neighborhood’s tree-lined streets.

On average, homes in the area feature 4 bedrooms, 2 baths, and 2 half baths. Car garages and large, wooded lots are also common.

Champion Forest homes are relatively affordable, starting at around $200,000 for older homes. Newer and bigger properties tend to sell for much higher prices. 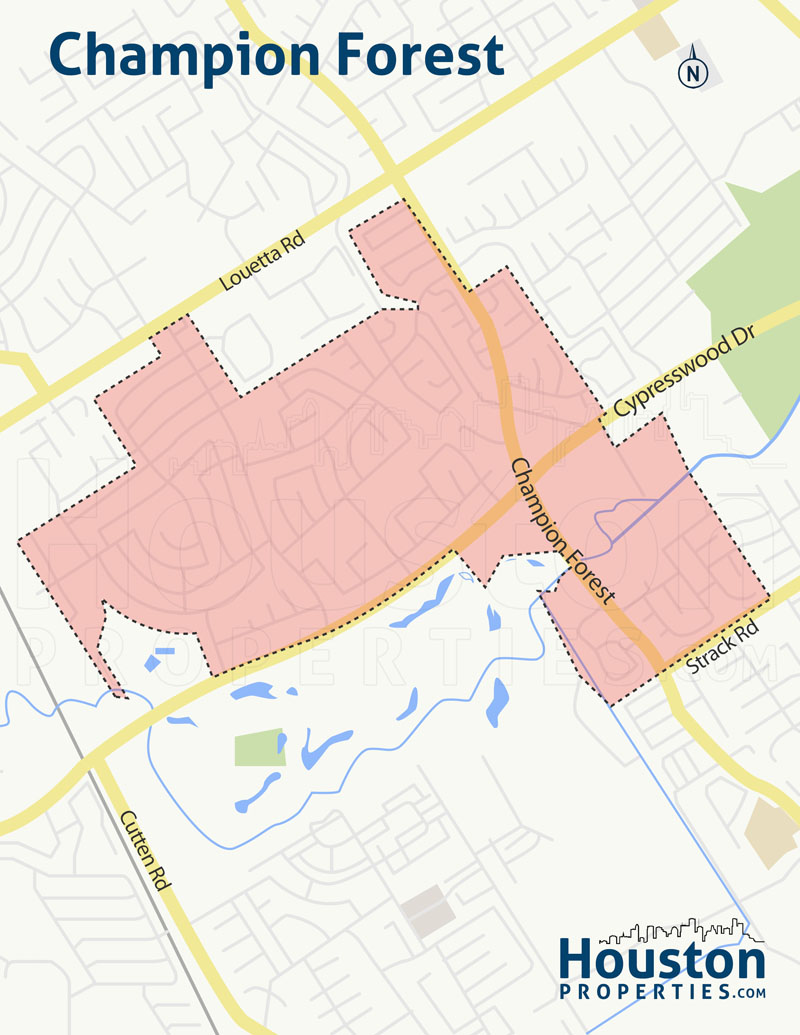 The following are some of the more notable private schools near Champion Forest.

To find an updated listing of all Champion Forest real estate zoned to any specific public school, please send an email to Paige Martin at Paige@HoustonProperties.com with the property preference and budget that you’re working with.

Paige is ranked as one of the top realtors in Champion Forest, Houston, and the state of Texas. Read more about the over 65 awards she’s won in the last few years.

Paige works with a tremendous number of buyers and sellers within Champion Forest.