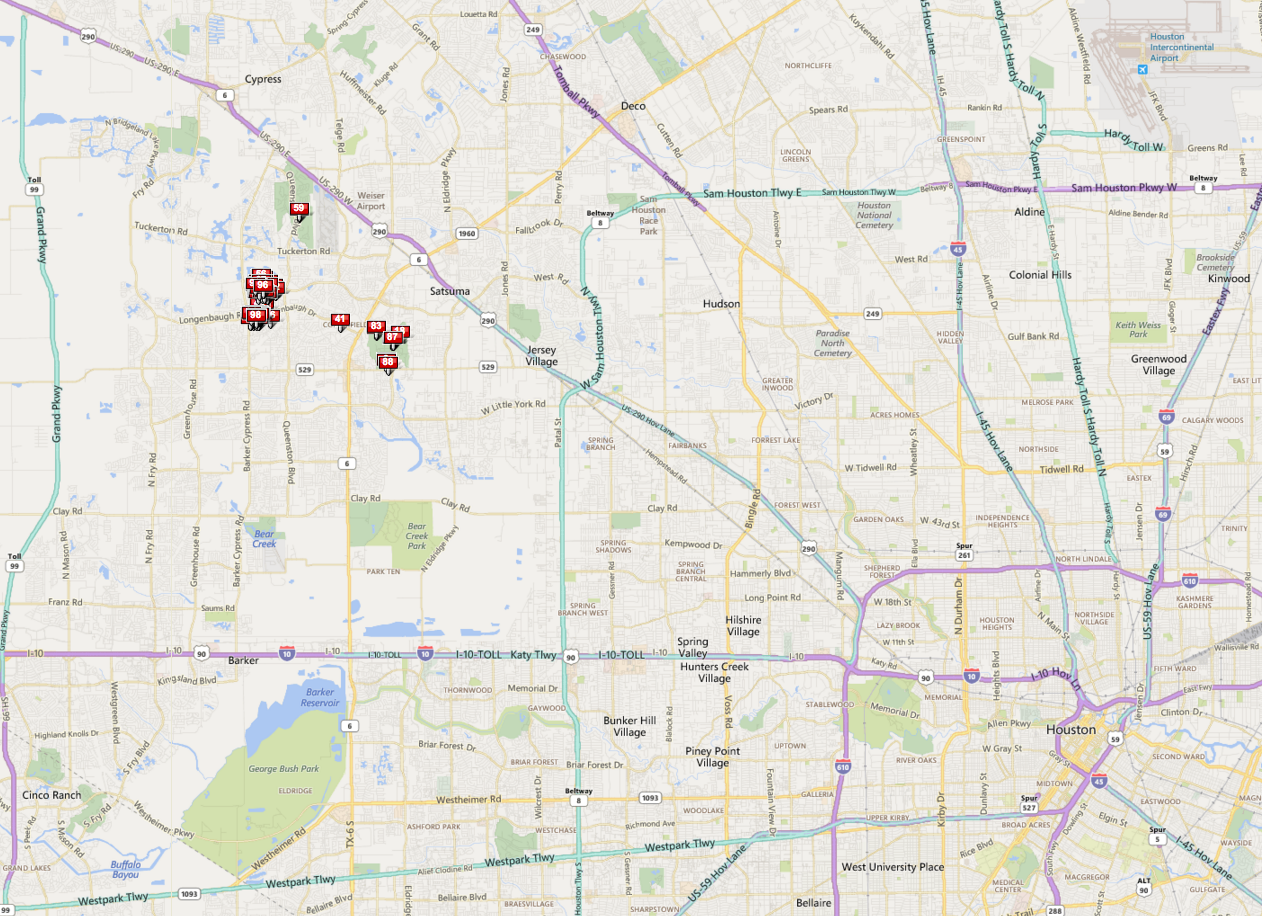 Nestled in a largely suburban area in northwest Houston, Copperfield is a master-planned community made up of seven villages.

Copperfield real estate have remained popular for a number of reasons, including its great location, schools, and accessibility.

For any inquiries about Copperfield homes recommendations, or off-market MLS listings, get in touch with Paige Martin, head of the Houston Properties Team and one of the best realtors in Houston.

Don’t see what you like?Get a custom list of the best homes for sale in Copperfield

Get help from Copperfield’s #1 Rated Realtor

Nestled in a largely suburban area in northwest Houston, Copperfield is a master-planned community made up of seven villages.

Located some 20 miles northwest of downtown Houston, Copperfield is a master-planned community nestled within a lush area along Texas Highway 6.

It covers around 2,000 acres of land south of Pebble Lake Drive and north of FM 529. Major Houston freeways like US 290, Interstate 10, and Beltway 8 are all easily accessible from Copperfield homes.

Cypress is a few miles northwest of the community, along with other master-planned communities like Canyon Lakes at Stonegate, Bridgeland, Cypress Creek Lakes, and Towne Lake, among others. The Energy Corridor, one of Houston’s major employment centers, is located south of Copperfield.

Copperfield is made up of seven distinct communities called villages:

Thanks to the community’s central location, Copperfield homes have schools, parks, retail and recreational areas, restaurants, and bars nearby.

Fun Things To Do Near Copperfield

Copperfield is mostly residential, though the villages do have areas for retail stores, restaurants, and other commercial establishments. Each village also has park, greenbelt, swimming, and recreational areas. Copperfield also features a 10-acre community center and community park just off Willow River Drive.

Copperfield homes aren’t too far away from retail, dining, and entertainment centers either, with several commercial establishments located along FM 529 and Highway 6. Copperwoood Village Shopping Center, for example, features Marshalls, Target, and Old Navy, among others.

Golf courses, like the Hearthstone Country Club and the Houston National Golf Club, are minutes away from Copperfield.

Thanks to the community’s location near main roads, residents can easily drive to other entertainment areas within Houston and surrounding communities.

Here are some of Copperfield TX must-visit places:

Neighborhoods near Copperfield Houston include:

Master-planned communities within Copperfield include:

Development in Copperfield started in 1977 when the Friendswood Development Company acquired 1,800 acres from the Gus Wortham estate.

The first homes in the area were completed and sold two years later. Development continued onto the next decade, and in 1989, Friendswood bought 260 acres more. In 1991, Standard Pacific of Texas bought 70 acres from the original developer and built Copperfield Place Village, with 295 homes.

Copperfield homes are zoned to Cypress-Fairbanks Independent School District. Students in the area can attend the following public schools:

The following are some of the more notable private schools near Copperfield homes.

To find an updated listing of all Copperfield real estate zoned to any specific public school, please send an email to Paige Martin at Paige@HoustonProperties.com with the property preference and budget that you’re working with.

Copperfield real estate have posted steady numbers over the past decade. The median sales price of homes in the area is at over $190,000.

Despite slight fluctuations, property values in the area have steadily increased. A number of factors have contributed to this upward trend, including Copperfield’s deed restrictions, great neighborhood amenities, and excellent schools, among others.

*Note: Due to the number of smaller communities in Copperfield, it may be more advisable to look at the real estate trends of the specific villages for a more accurate view. 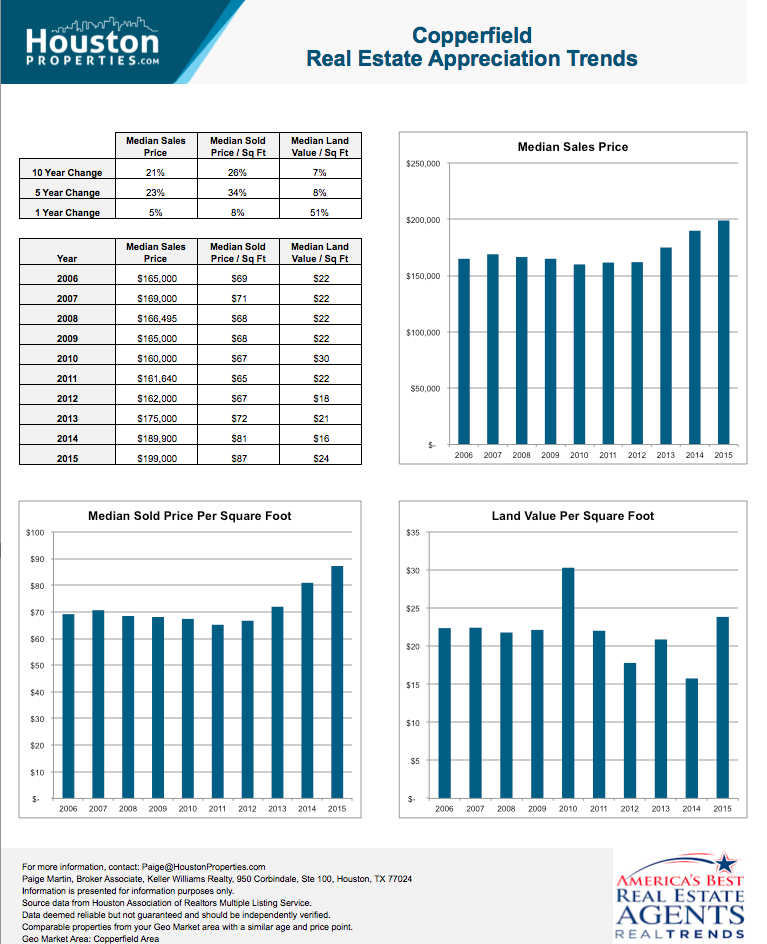 Copperfield is mostly made up of detached single-family homes on spacious lots. Traditional aesthetics and beautifully maintained lawns are common in the area. Some villages feature bungalows, while others offer two-story homes.

Copperfield homes typically feature 2- to 3-bedroom floor plans, though bigger properties can offer 4 to 5 bedrooms. Most homes in the community were built in the 80s to the early 1990s. Newer construction homes from the early 2000s are available in Copperfield Place Village.

Each village has its own set of deed restrictions, enforced by the village’s community association.

Prices for Copperfield homes for sale depend on a number of factors, including location, age, and size of the home.

Due to the area’s deed restrictions, there are no Copperfield townhomes for sale. There are however, plenty of patio homes and townhomes available in nearby communities.

There are no mid- or high-rise Copperfield condos for sale, but plenty of units are available within Houston’s Inner Loop.

To see other condos within the Inner Loop, see Inner Loop Houston Condos. 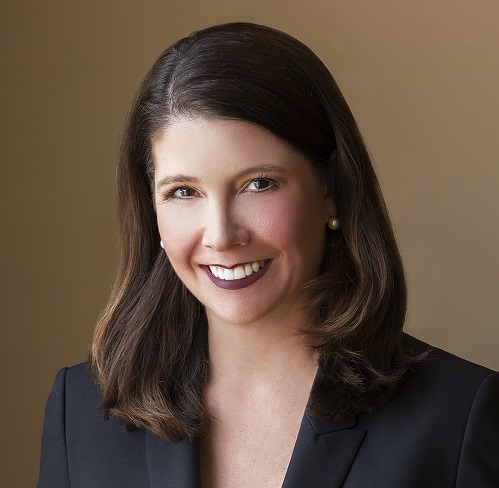 Paige works with a tremendous number of buyers and sellers within Katy, earning praises like “Paige Martin is the best Copperfield TX realtor I know.” Read more about client feedback and ratings here.

Paige is ranked as one of the top realtors in Copperfield Houston, and the state of Texas. Read more about the over 65 awards she’s won in the last few years.