Here's a look at Houston neighborhoods that flood and did NOT flood during Imelda. Also, here’s a list of things to do to address minor to major property damages due to flooding.

Just two years after Hurricane Harvey, Tropical Depression Imelda is now one of the wettest storms to hit Texas.

While some parts of Houston is no stranger to flooding, many are not used to dealing with a catastrophe of this magnitude. Early reports also show that many neighborhoods that did not flood during Harvey, are now suffering from Imelda flooding.

As homeowners face minor and major property damages (for some, even potential loss of houses because of flooding), what do we do now?

Based on our calls and outreach, we have compiled a list of Houston areas that flooded (and those that did not flood). If you have any information we can add or anything that appears wrong please email [email protected]

Houston Real Estate Post Imelda: What Happens After The Flooding? 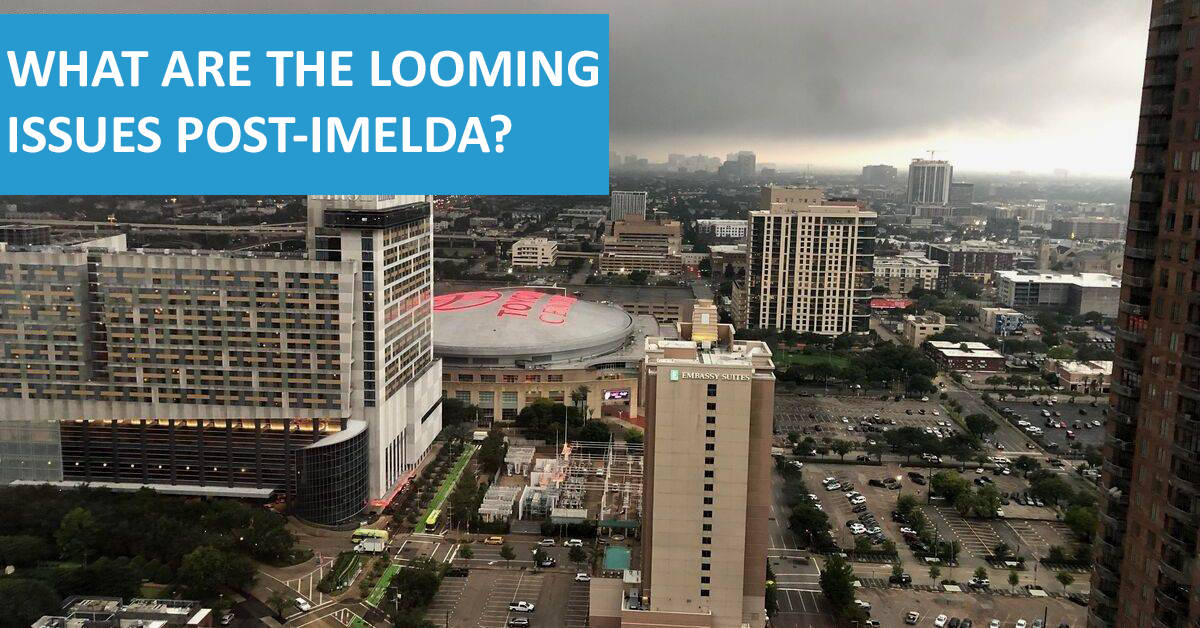 Home values and land prices in flood prone areas are materially impacted from the floods. If you're looking to buy a home in areas of Houston that did not flood, please contact us for streets and subdivisions that did well during Harvey and Imelda. Email [email protected]

Our heart goes out to everyone affected by Tropical Depression Imelda.

Based on what happened after Hurricane Harvey (and previous similar disasters), here’s likely what the Houston real estate market will look like for the next few months:

It is a good time to be a buyer as there will be fewer buyers in the market (ergo less competition). Home search will be slow because of:

There are also typically several deals that come on the market after a natural disaster like this. They are rare in non-flooded areas, or those Houston neighborhoods least flooded by Imelda, but they often come from the following types of situations:

Houston Neighborhoods With Little To No Flooding From Imelda 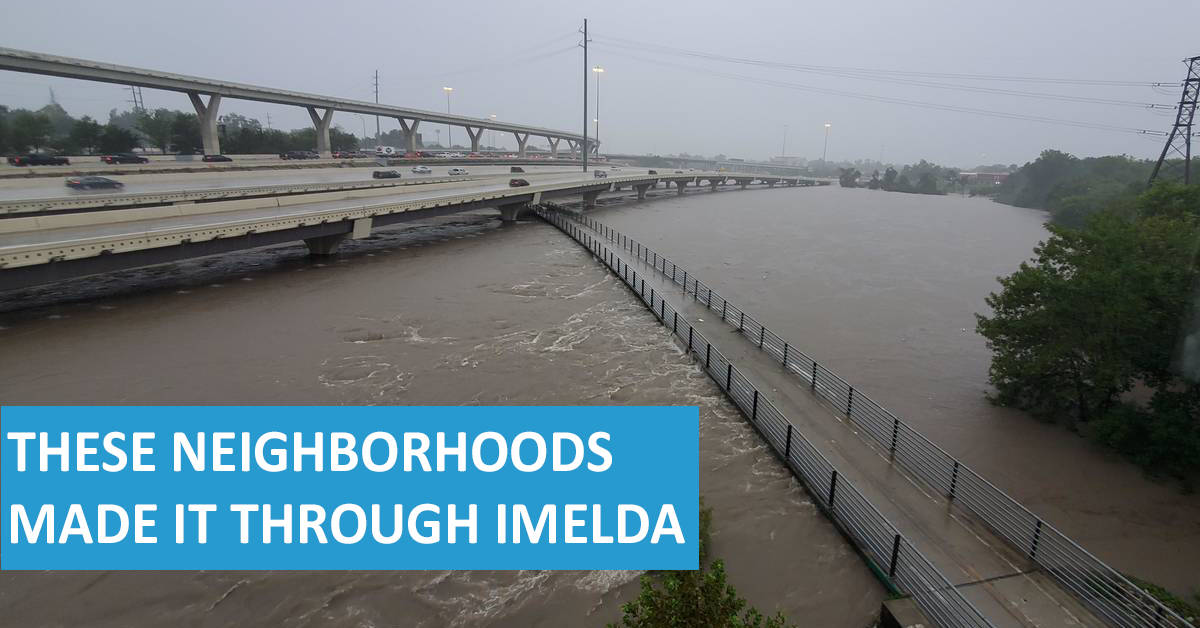 Our list of Houston neighborhoods that did NOT flood during Imelda is updated real-time. We are reaching out to clients, partners, and contacts all over Houston to get the most updated data. If you have specific questions or updated information, please email us at [email protected]

If you have specific questions or updated information, please email us at [email protected]

Neighborhoods And Communities That Did Well:

These are the communities that were not included in the list of flooded areas in Houston during Imelda. The Houston flooding map, which you can find below, also shows how well these neighborhoods did. 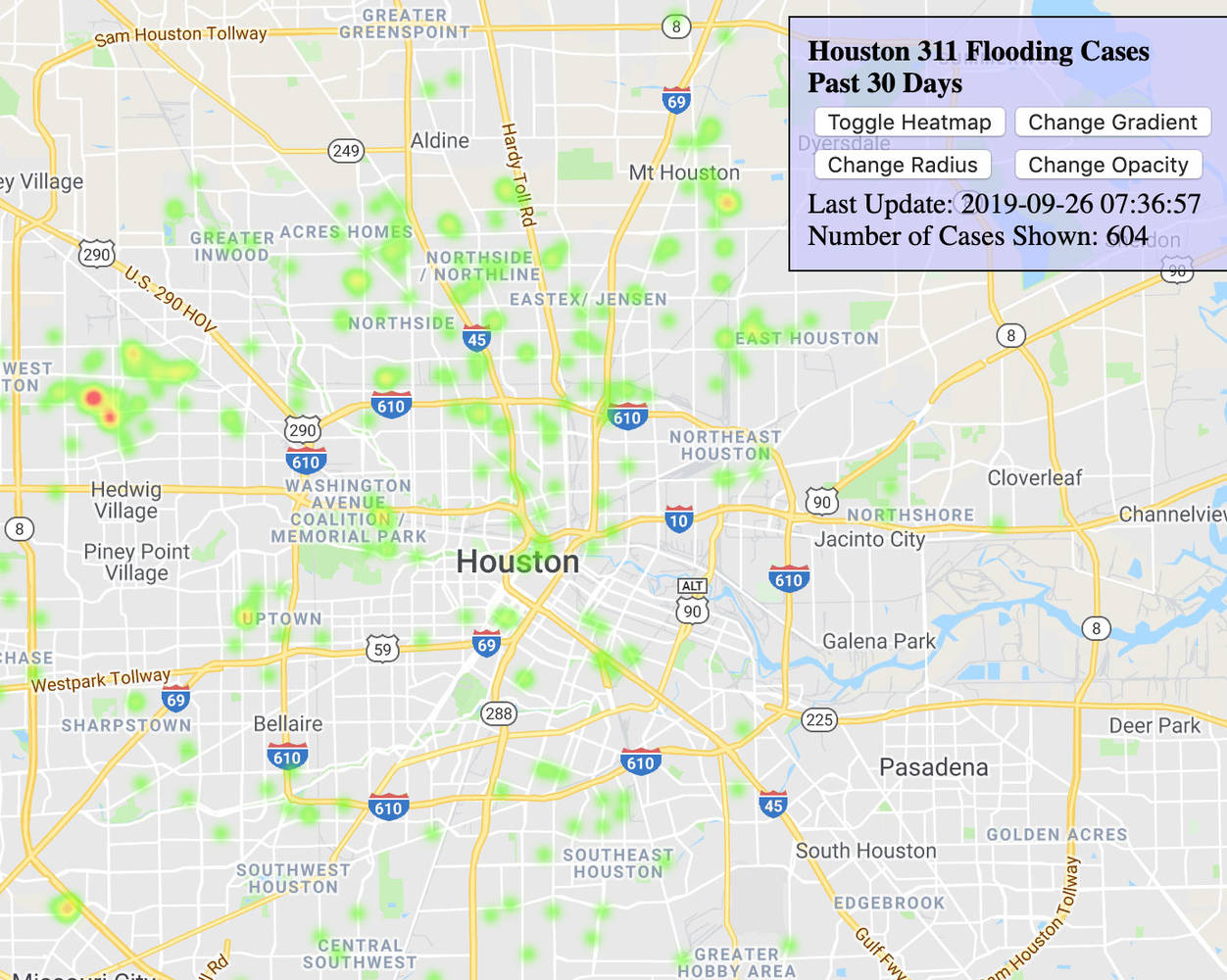 Where were Houston 311 service requests/calls coming from during Imelda?

Heat Map of flooding-related 311 service requests/calls made between August 26 to September 26.

Red and orange areas had the highest 311 Service calls about flooding during Imelda.

Yellow areas had moderate 311 service calls about flooding during Imelda.

Green areas had somewhat of a concentration of 311 service calls about flooding during Imelda.

Areas without color did not show reports of flooding calls.

Below, please find our Houston neighborhood maps that show the breakdown of what areas flooded in Houston. Please contacts us for more specific maps. 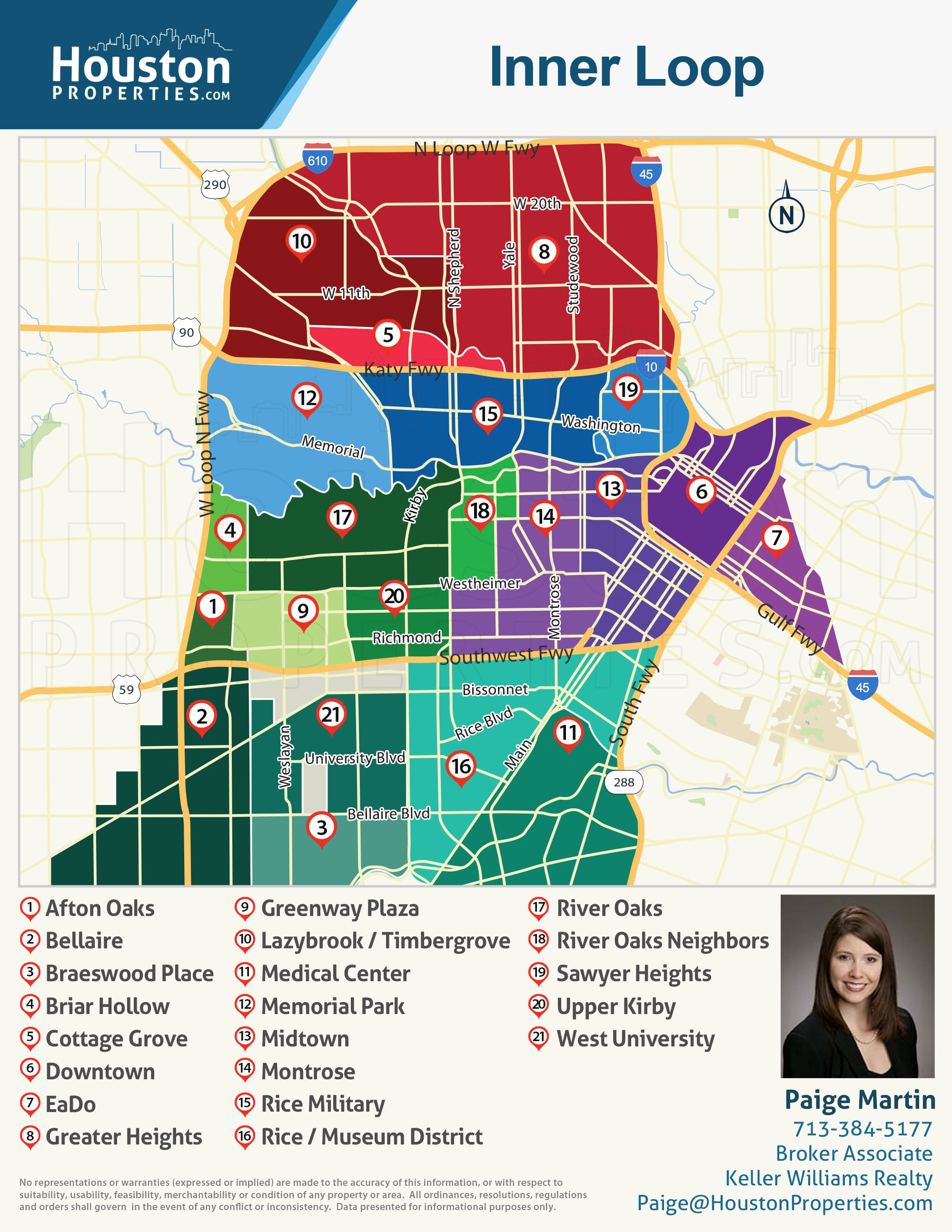 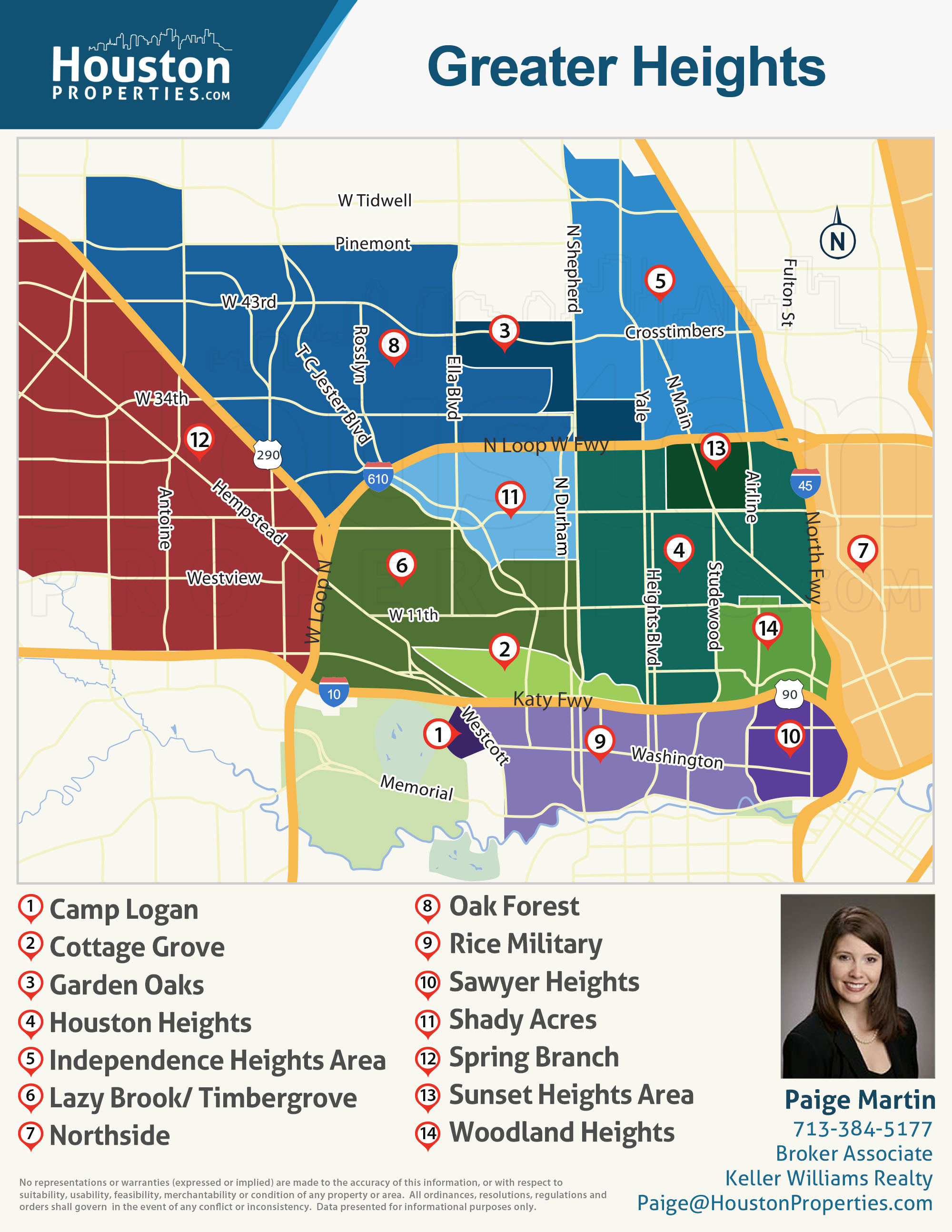 Houston Neighborhoods That Flooded Due To Imelda 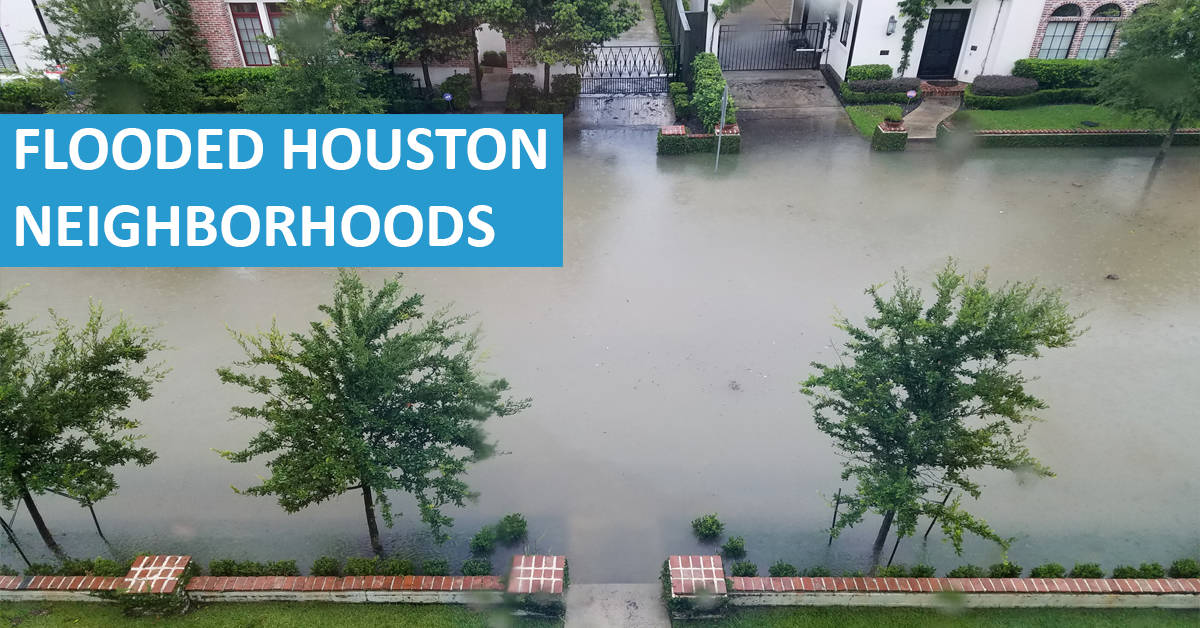 Our list of Houston neighborhoods that flood during Imelda is updated real-time. We are reaching out to clients, partners, and contacts all over Houston to get the most updated data. If you have specific questions or updated information, please email us at [email protected]

A flood is defined as a rising body of water that impacts two or more contiguous properties (e.g. water rising over a curb onto two adjacent homesites is a flood).

We collected 200+ data points throughout Houston including videos and pictures of Houston area flooding Imelda.

When we originally posted the full list of areas that experienced reported flooding events, we received an outcry from area residents who did not want their region listed.

As we are in the business of selling homes and providing the most valuable data to our clients (not of making area residents angry) we have removed the list of flooded areas from this post.

Clients, if you’re looking for the full, accurate data set of flood reports from Tropical Depression Imelda or if you have more videos and photos to share, please contact us at [email protected]

One very interesting thing to note is that there is a material disconnect between buyers and sellers.

Again, the technical definition of a flood is a rising body of water that impacts two or more contiguous properties – if it’s on the property line – it’s a flood (regardless if it went into the structure or not).

As a side note – we are seeing a very similar trend in a number of public listings in the HAR MLS. Some sellers will include the words “DID NOT FLOOD” in the public description. However, later in the Seller’s Disclosure, they will acknowledge that water came over the property line and/or water came into storage sheds or garages. Some buyers feel misled because they don’t want water in their house, in their garage or on their property.

Unfortunately, despite the regulations, not all sellers have updated their listings with the newest seller’s disclosure notices. If you have questions about this or would like help on due diligence, please contact us.

From our research, most of the flooding from Imelda was isolated to the property’s boundary lines (as opposed to the flooding in the home/structures that many residents experienced during Harvey – as Hurricane Harvey stayed over Houston for a longer duration).

Below, we’ve included a collection of videos and Houston flooding pictures from third parties throughout parts of Houston.

We’ll leave it to you to determine if these are flooding events or not . . .

However, if you’re concerned about flooding in Houston and you want to know what the resale data says, please contact us. We can provide you data on how storm Imelda flooded Houston areas so that you can avoid them. We can definitely help you if you’re looking to buy or sell a home.

Knowing the most flooded areas in Houston Imelda tropical storm can work for your benefit when you are purchasing a home. 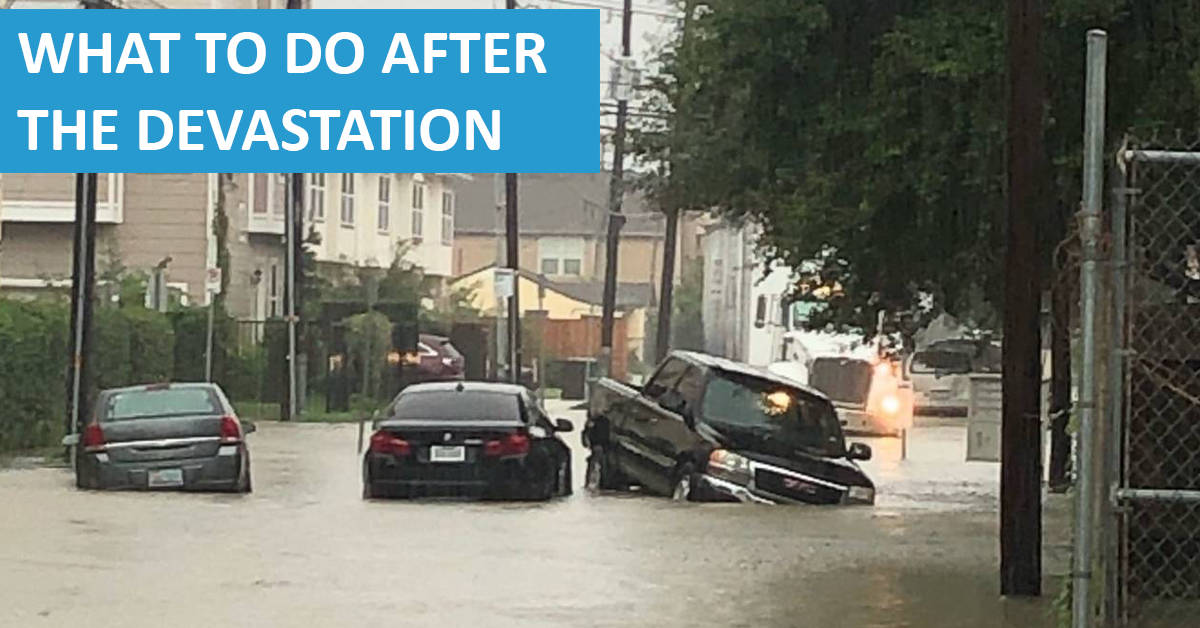 We have some great vendors. We have already reached out to a few and while some of them are dealing with their own home flooding, some are already preparing to bring in contractors from out of state to be able to assist with a rapid clean up. Contact us if you need recommendations.

Imelda is one of the wettest storms to hit Houston.

Reminder: Property assessing or rebuilding must be done after the storm has passed. It is best to keep monitoring the storm’s development until the coast is cleared by government authorities. Check credible news sites, including local and national radio networks.

Houston Flooded Areas Imelda: What to Do After

As soon as authorities have confirmed that the storm has passed, you can try to start with rebuilding your home.

What To Do To Homes That Flooded Due To Imelda 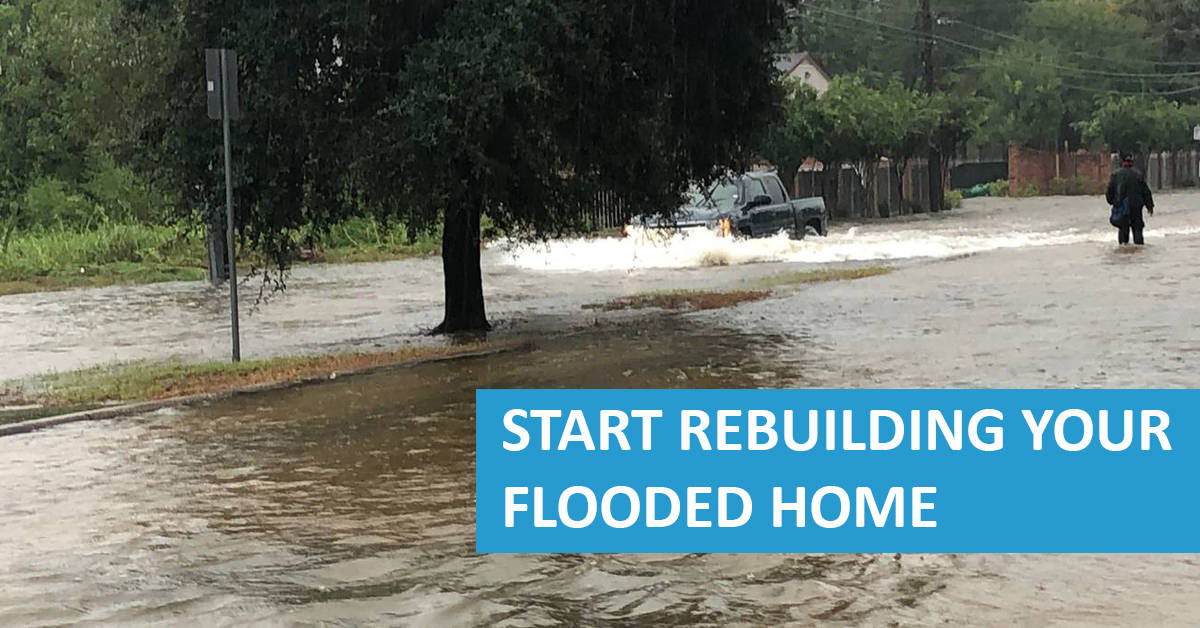 We have great contractors and vendors. Contact me if you need recommendations.

What To Do To Homes That Flooded Due To Imelda
Finding water rushing in, invading the deepest recesses of your home is heartbreaking. When you realize that major flooding will cause you to lose some of your most precious belongings, just hang on. Below are some of the things you can do to help lessen the burden caused by Imelda.