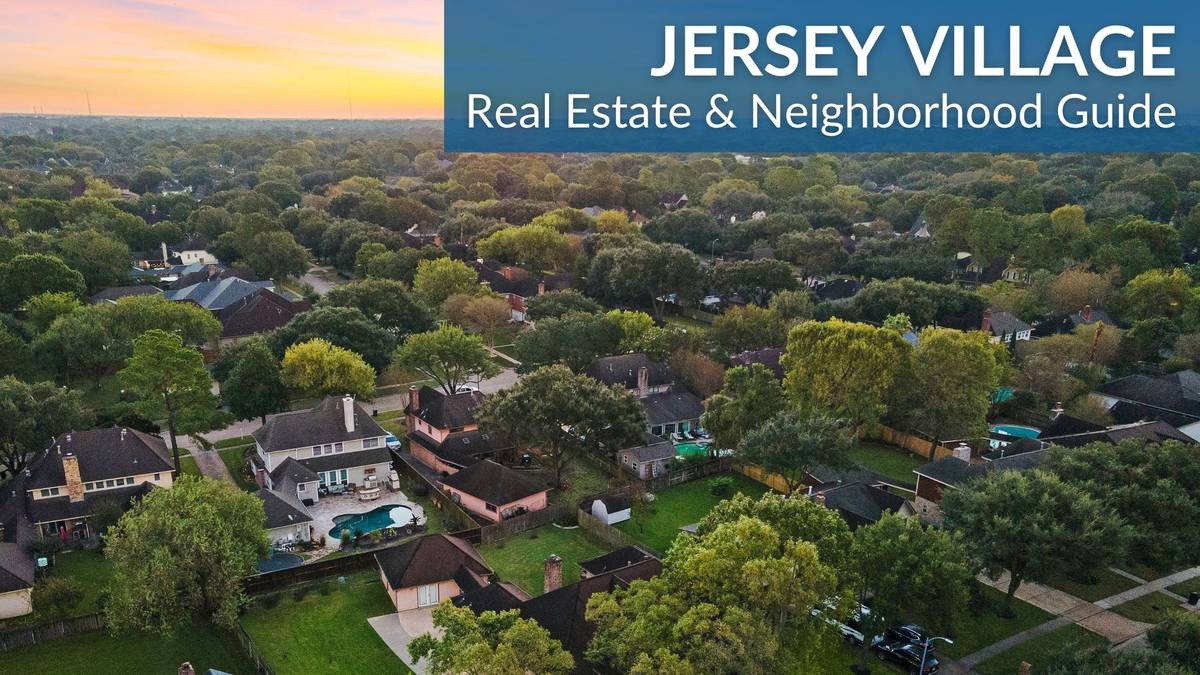 Located at the crossroads between Highway 6 and U.S. Highway 290, Jersey Village has close proximity to the majority of Houston's key districts. It’s considered to be one of the top suburbs in Houston.

RECREATIONAL ACTIVITIES: Activities available in Jersey Village include a public swimming pool, a golf course, and a public park with a playground. A trail for hiking and biking is easily accessible to the residents.

QUALITY EDUCATION: The neighborhood is served by Cypress-Fairbanks Independent School District - the largest school district to have all 87 schools earn a ‘Met Standards’ rating from the Texas Education Agency. Cook Middle School and Jersey Village High School are schools zoned to Jersey Village.

NEARBY BUSINESS CENTERS: Jersey Village provides direct access to many businesses located downtown, many of which belong to the Cy-Fair Chamber of Commerce. The area is less than 30 minutes away from two of the biggest employment centers in the city: Energy Corridor and Downtown Houston.

Jersey Village is a home rule municipality. Under Texas law, local residents are allowed to govern their city as they wish after electing a mayor and city council. The city government is prioritizing the neighborhood’s economic and residential development and their heavy involvement has been putting off possible homeowners.

To get personal advice on buying or selling in Jersey Village, contact Paige Martin, one of Houston’s best condo realtors and one of the top-ranked Realtors in the United States.

"The Houston Property Team was simply outstanding! They are extremely knowledgeable and competent, they also provided a comprehensive analysis of all the condos and neighborhoods we were interested in making the whole buying process very easy. We highly recommend them and could not be happier about our choice!" - Claudia O'Leary (Google Review) 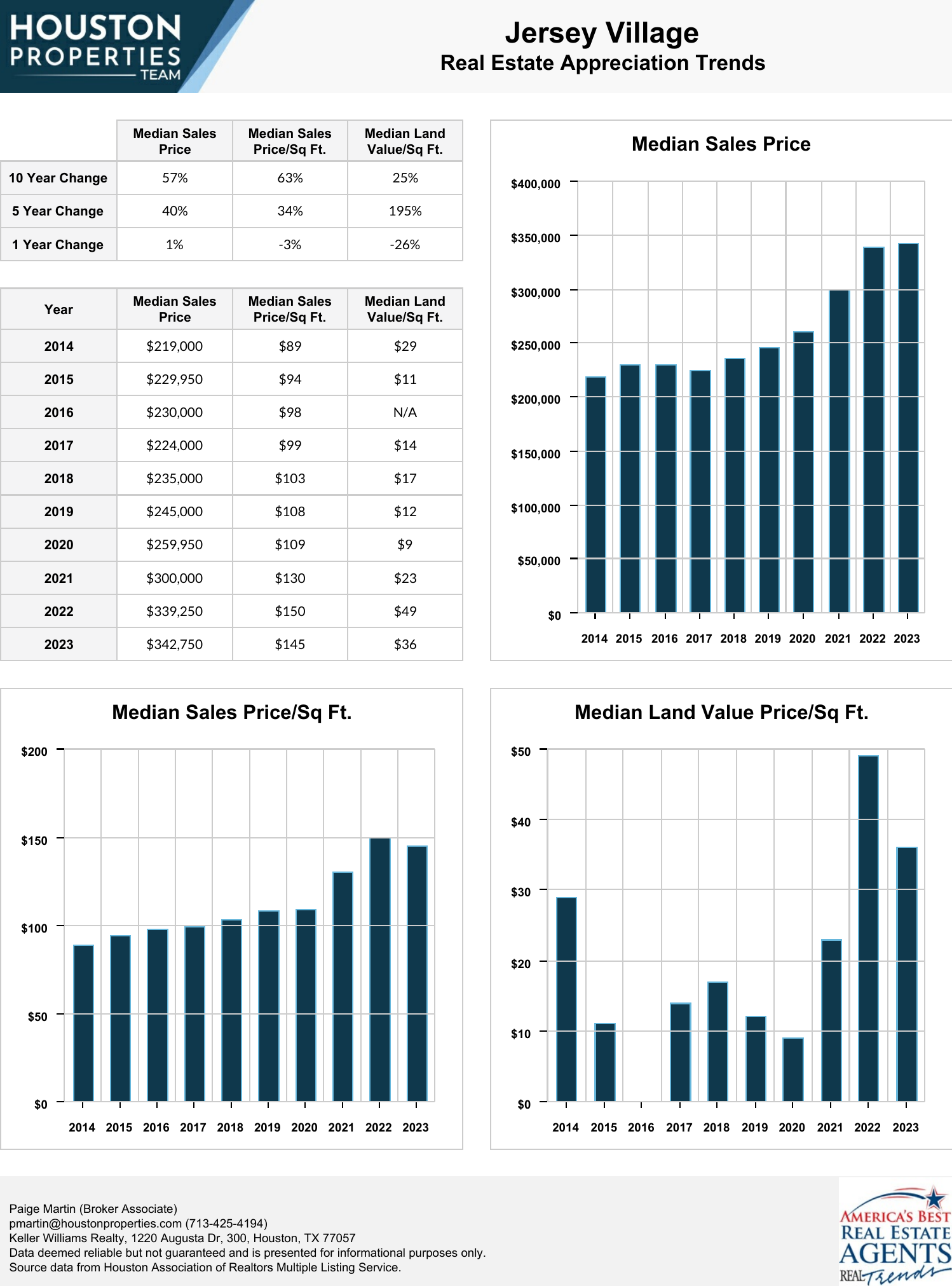 Jersey Village is a small city located at the crossroads between Highway 6 and U.S. Highway 290. It’s considered to be one of the top suburbs to live in Houston.

RECREATIONAL ACTIVITIES: There are a lot of activities available in Jersey Village including a public swimming pool, a golf course, and a public park with a playground. A small lake is also available to residents and guests who are living near its shores.

Jersey Village provides direct access to many businesses located downtown, many of which belong to the Cy-Fair Chamber of Commerce. The area is less than 30 minutes away from two of the biggest employment centers in the city: Energy Corridor and Downtown Houston.

Jersey Village is a neighborhood of about 600 homes. It sits at the crossroads of two major highways, Northwest Freeway (US 290) and Sam Houston Parkway (Beltway 8). 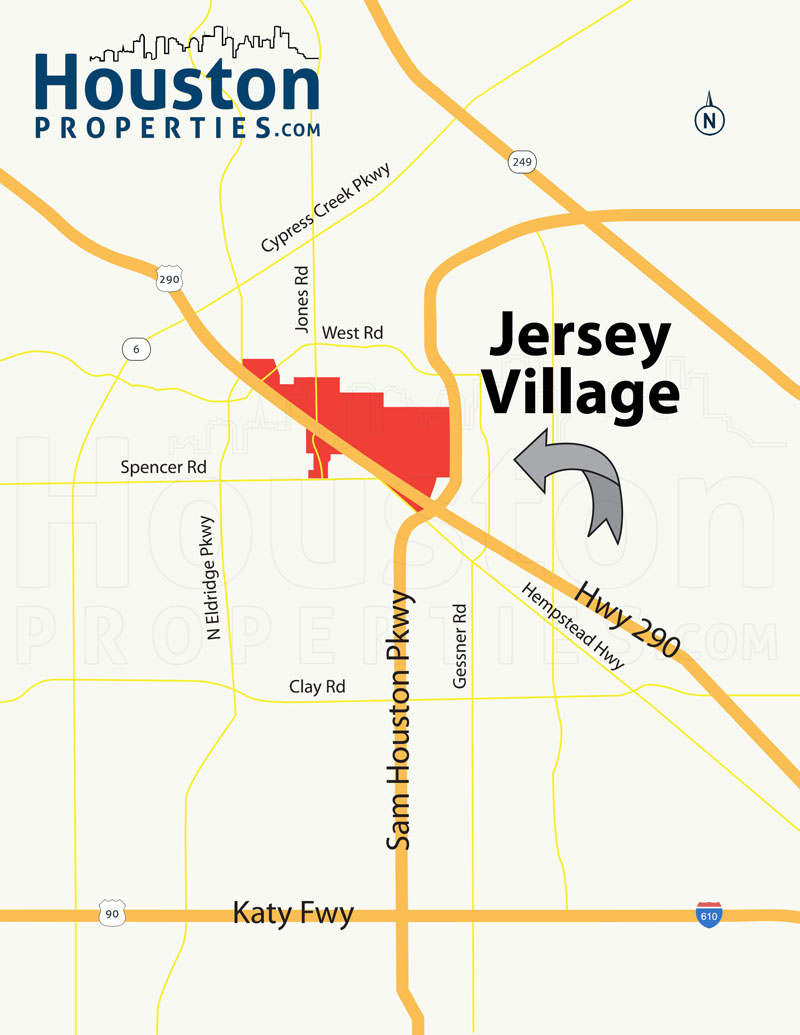 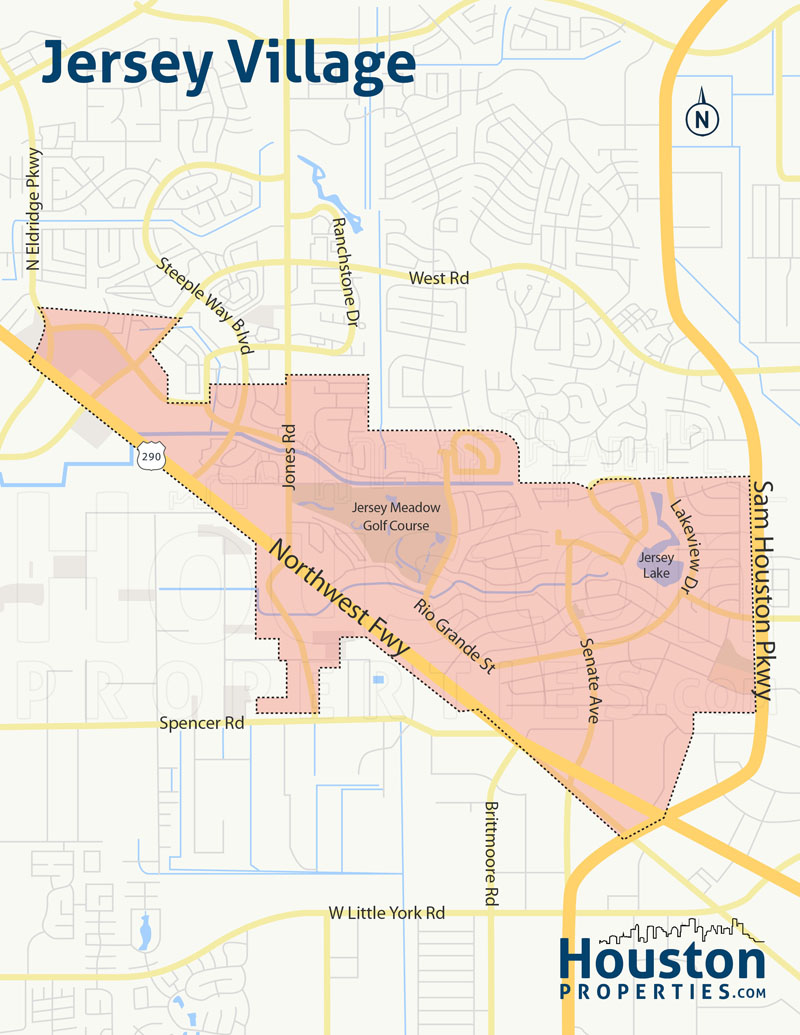 Jersey Village homes are zoned to Cypress-Fairbanks Independent School District (CFISD), the largest school district to have all its 87 schools rated as ‘Met Standards’ by the Texas Education Agency.

CFISD is the third-largest school district in Texas and the 22nd largest in the United States. It has 87 schools educating more than 114,000 students.

Schools zoned to Jersey Village include:

To find an updated listing of all Jersey Village real estate zoned to any specific public school, please send an email to Paige Martin at PMartin@HoustonProperties.com with the property preference and budget that you’re working with.

*Note: School zoning tends to change from year to year, the information provided above is accurate but not guaranteed. Please double-check by visiting the school’s website.

Clark W. Henry owned the original Jersey Village site and founded the community in 1953, along with N. E. Kennedy and Son. They made the decision to build homes on Jersey Lake. Mr. Henry owned 1,236 acres of land on which he ran the F&M Dairy. According to the story, Henry previously ran a dairy and called the new development after his Jersey cows.

Hardly five miles of roadways were built at first, along with drains, water, sewage, gas, and lighting. A few houses were constructed along the Jersey Drive, and the first family relocated in late October 1954.

Local students were initially taught in Cypress and Fairbanks, but an area was allotted at Jersey Village for the construction of the school, a park, and an 18-hole golf course. In 1956, the community was incorporated, with a volunteer police force.

Jersey Village is approximately bounded to the west by the US Highway 290 (Northwest Freeway) and to the east by the Sam Houston Parkway. The neighborhood is traversed by major roads such as Jones Road, N Eldridge Parkway, and West Road. Due to its central location and proximity to Downtown, the community became a popular suburb with increasing demand.

Presently, the neighborhood is known for its "small town" atmosphere and rapid commercial and real estate development.

Housing options in the area have since expanded to redeveloped vintage houses and custom-built modern buildings.

Fun Things To Do Near Jersey Village Houston

Homes in Jersey Village are just minutes away from a variety of entertainment, dining, and retail options.

A swimming pool, a park with playground equipment, and a small lake are also maintained by the neighborhoods and an active homeowners' association.

Jersey Village, one of Houston's Best Golf Course Communities, provides residents with a variety of recreational opportunities, including the Jersey Meadow Golf Course.

Having a golf course in the neighborhood has its advantages as well. 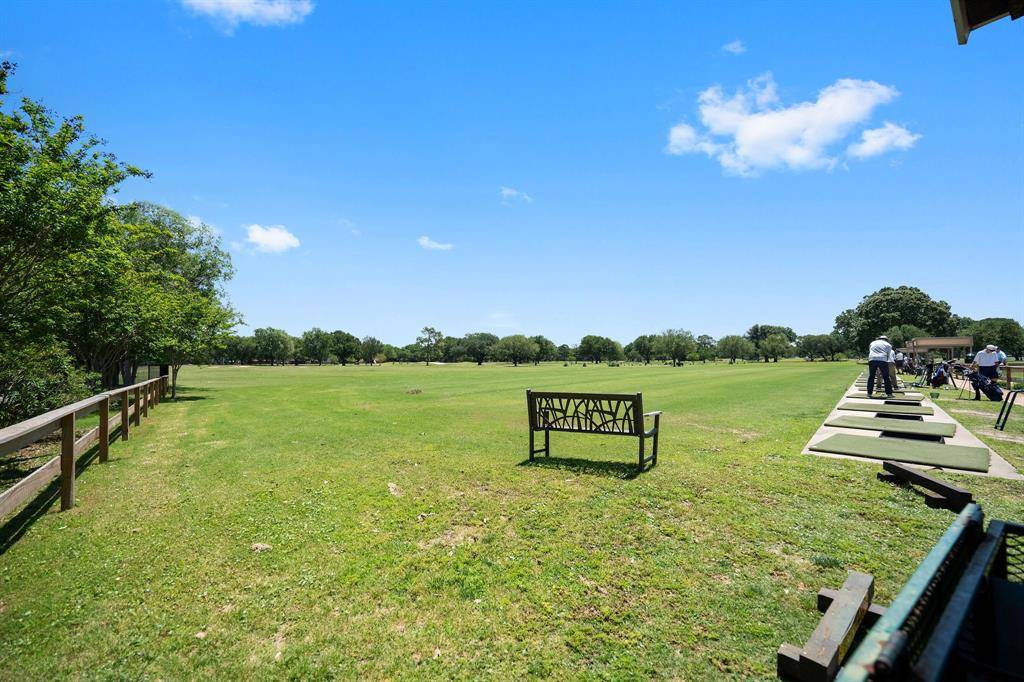 Downtown and the Energy Corridor are less than 30 minutes away, and Memorial City Mall and CityCentre Plaza are only 15 minutes away.

Here are some of Jersey Village Houston's must-visit places: