Nestled within one of Houston’s Best Suburbs, Lake Olympia is a “lakeside” master-planned community popular for its breathtaking estates and great neighborhood amenities.

The city has remained quite popular due to its: 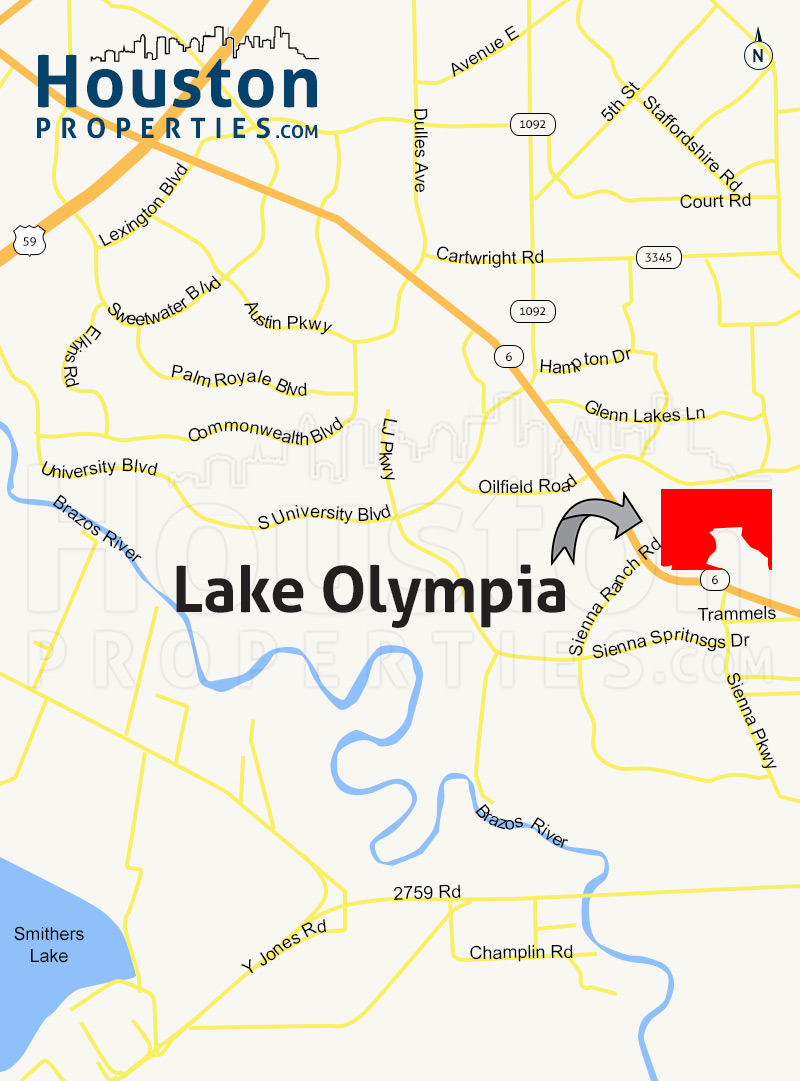 Lake Olympia real estate can be tricky to navigate, due to limited home inventories and the variety of homes (some built in the mid-80s) in the area.

Contact Paige Martin, one of Houston’s Best Realtors and one of Lake Olympia’s most active real estate agents, if you’re looking to buy or sell a home in Lake Olympia.

For any inquiries about Lake Olympia homes recommendations, or off-market MLS listings, get in touch with Paige Martin, head of the Houston Properties Team and one of the best realtors in Houston.

Don’t see what you like?Get a custom list of the best homes for sale in Lake Olympia

Lake Olympia is a master-planned community just off of Highway 6 in Missouri City.

Made up of around 1,860 single-family homes, the master-planned community is divided into 19 sections or subdivisions. Opened in 1984, Lake Olympia features around 130 acres of lakes and preserved the area’s mature trees.

The master-planned community is located just off Highway 6. Lake Olympia Parkway connects to Fort Bend Parkway, while Beltway 8 and US 90 Alternate are minutes away from the community.

Residents have several community amenities from which to choose, including the Marina Clubhouse. Walking/jogging trails and fountains line the community’s many lakes. Swimming pools with wading areas and lighted tennis courts are also available for residents.

Dining and retail options line Highway 6. Riverstone Shopping Center, The Shops at Williams Trace, Sugar Land Town Square, and First Colony Mall are all minutes away from the community.

Lake Olympia is made up of 19 communities, some of which are gated. The master-planned community has deed restrictions and covenants in place.

The following are some of the more notable private schools in and around Lake Olympia.

To find an updated listing of all Lake Olympia real estate zoned to any specific public school, please send an email to Paige Martin at [email protected] with the property preference and budget that you’re working with.

Lake Olympia real estate has been on the steady rise in the past decade, with the median sales price of homes at just under $250,000.

Land values in the community has also increased, peaking at over $40.

Several factors have contributed to the master-planned community’s continuing popularity, including the its schools, accessibility, and excellent amenities.

Lake Olympia is made up of about 1,800 single-family homes, built between 1984 and 2016. The community features traditional homes, lakefront estates, and homes in gated sections.

There are no townhomes in the master-planned community. There are, however, a number of options in other Missouri City neighborhoods like Quail Valley.

There are no mid- or high-rise Lake Olympia condos. There are a few options in the Sugar Land area, including the City Plaza at Town Square.

For more options, there are more available in Houston’s Medical Center, Museum District, and Galleria areas.

In 1982, a group of developers headed by Andrew M. Choy purchased a 1,000-acre parcel of land. The area had been previously owned by Edward Palmer, a former judge of the 7th Judicial District of Texas.

Previously known as the Palmer Plantation, the area was part of the original Stephen F. Austin land grants. Palmer bought 640 acres from David Bright in 1860, and the land stayed with the family until the early 1980s.

Lake Olympia opened in 1984, with 130 acres of lakes and mature trees.

The development was later sold to Tan Yu, a Filipino-Chinese businessman and philantrophist.

Today, Lake Olympia is one of the most popular master-planned communities in Missouri City. It has received several awards, including the National Association of Home Builders’ Gold MIRM Award, and awards from the Texas Association of Builders and Greater Houston Builders Association.

Fun Things To Do Near Lake Olympia

Lake Olympia offers a number of community amenities for its residents.

The community’s various lakes, home to various wildlife (like fish, turtles, and ducks), are lined with walking and jogging trails. Swimming pools with wading areas and lighted tennis courts are also available for residents.

Lake Olympia’s Marina Club, located just off Lake Olympia Parkway, features a kitchen area, a main hall, and a deck. Residents can rent the clubhouse for events and meetings.

The community’s civic association also organizes a number of events for residents. Residents can also join the community’s various clubs, including the garden club and the swim team.

For retail and entertainment, residents can take a short drive to Riverstone Shopping Center, a 200,000-square foot shopping center along Highway 6. It features several stores and dining options, including Kohl’s, Target, and Home Depot.

Nearby Kitty Hollow Park (located along Highway 6) also features a number of facilities, including a play area, a fishing pier, several pavilions, a dog park, a splash pad, and baseball and soccer fields.

Here are some of Lake Olympia’s must-visit places: