Lazybrook is one of the best performing real estate markets in Houston. Lazybrook homes for sale have undergone significant appreciation over the last 10 years.

Bordered by North Loop Freeway on the north, Loop 610 on the east, and Katy Freeway on the south, Lazybrook residents have easy access to major Houston freeways. The neighborhood is only about 10 minutes away from Downtown Houston, Memorial, and Galleria.

View pictures and information of all Lazbyrook homes for sale below.

Don’t see what you like?Get a custom list of the best homes for sale in Timbergrove / Lazybrook 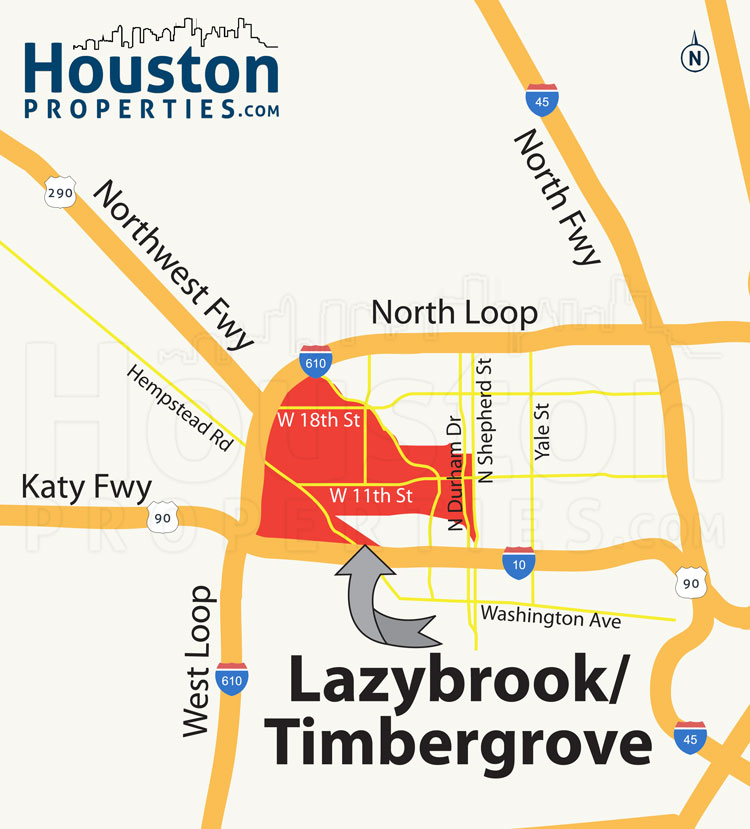 Located right within Houston’s Inner Loop, Lazybrook is a quiet neighborhood made accessible by its nearness to main city freeways.

Lazybrook homes for sale are nestled within the heavily forested boundaries of West 18th Street from Ella to 610, 610 to West T.C. Jester, T.C. Jester to Ella Blvd. and on the South side of West 18th the streets of Willowby, Haverhill, Tannehill and Guese off of Ella Blvd.

Lazybrook was named after the White Oak Bayou, which forms the neighborhood’s eastern boundary. During the early ’40s and ’50s, Lazybrook remained largely wooded and undeveloped. Development of the major Houston freeways spurred the neighborhood’s suburban growth.

Named after Thomas Albert Sinclair, founder of the Heights Hospital, Sinclair Elementary is among the top public elementary schools in Houston. It has a “Met Standards” rating by the Texas Education Agency. GreatSchools also gives it a 6 out of 10 score, with its students scoring above the state average in Math and Reading.

Frank Black Middle School is best known for its Vanguard Magnet program. Vanguard is a program that offers advanced and accelerated academic curriculum for students who have been designated as “Gifted & Talented” using the HISD GT matrix.

Waltrip High School is rated 5 out of 10 by Greatschools. While it remains average in most subjects, its Grade 11 students got between 91% to 98% test scores in English Language Arts, Math, Science, and Social Studies.

Waltrip is also one of the highest performing comprehensive high schools in Houston Independent School District (HISD). The school was named “Recognized” by the Texas Education Agency, one of the few urban high schools in HISD to receive such a designation.

Notable private schools within a 10-15 minute drive of Lazybrook include:

To find an updated listing of all Lazybrook real estate zoned to any specific public school, please email Paige Martin at [email protected] with the property type and budget that you’re looking for.