About 5-10 minutes away from Downtown Houston, Memorial, and Galleria, Lazybrook is also known for its lush foliage, tree-lined streets, and large lots.

The Lazybrook Timbergrove community is nestled within the wooded boundaries of West 18th Street from Ella to 610, 610 to West T.C. Jester, T.C. Jester to Ella Blvd. and on the South side of West 18th the streets of Willowby, Haverhill, Tannehill and Guese off of Ella Blvd.

Lazybrook is a deed-restricted neighborhood of nearly 700 homes located 7 miles northwest of Downtown Houston. The residential area also lies west of the Houston Heights and along the wooded banks of White Oak Bayou in the near northwest quadrant of the city.

Young professionals and empty nesters often prefer Lazybrook homes because of its Inner Loop location. Aside from nearby Downtown Houston, the Galleria area, Memorial Park, and Museum District are also only about 5-10 minutes away. 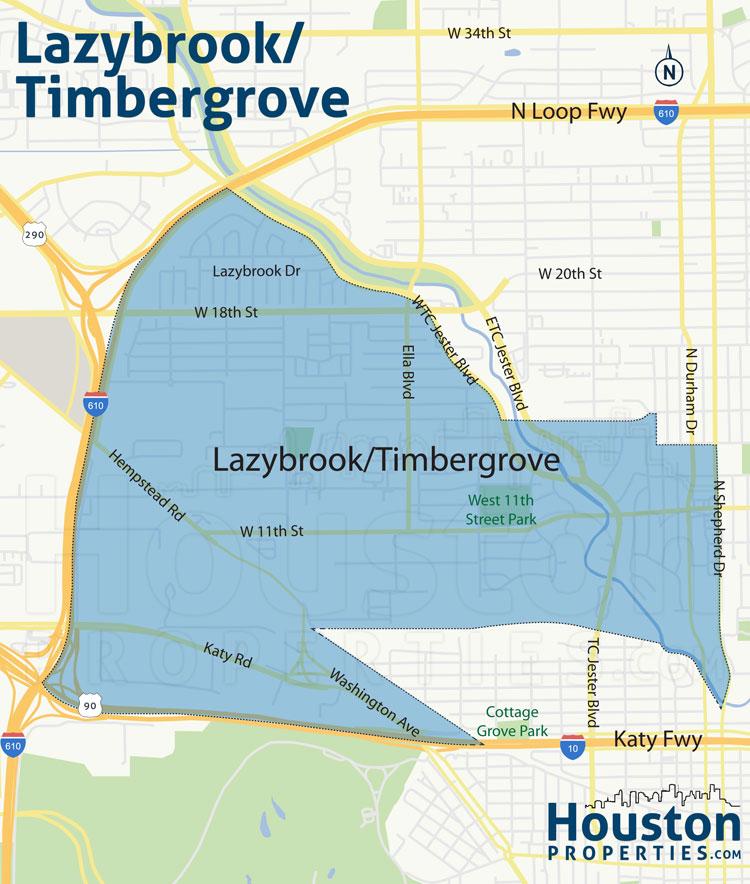 Lazybrook’s Inner Loop location and nearness to major freeways make it one of Houston’s best neighborhoods.

Commercial hubs Downtown Houston and Galleria are both a few minutes away. One of the country’s biggest and “greenest” parks, Memorial Park, is also roughly 5 minutes away from all Lazybrook homes.

Lazybrook is the 36th most walkable neighborhood in Houston. With a “Walkability” rating of 53, Walkscore.com notes that “some errands can be accomplished by foot”.

Some of the most popular include:

Parks near Lazybrook homes include: