One of the most expensive neighborhoods in Texas, Bunker Hill Village is an upscale enclave in the westernmost area of the Memorial Villages.

Like most of the Villages, Bunker Hill features some of the most elegant real estate west of Downtown Houston. Residents want for very little, as homes in the neighborhood feature:

Forbes listed Bunker Hill Village as one of the “Top Places to Live Well” in 2008 and it is apparent in the neighborhood’s serene and affluent atmosphere.

Among the six Memorial Villages, Bunker Hill Village sits on the westernmost area nearest where Katy Freeway (I-10) and Sam Houston Parkway (Beltway 8) meet. The independent city is adjacent to Hedwig and Piney Point to the north and east, respectively.

Bunker Hill, like nearly all of the Villages, is mostly residential, but it has easy access to retail and entertainment options located in Hedwig and Houston.

During the 1930s, Bunker Hill Village was a sleepy community populated with farms and sawmills. It shares this somehow rural history with the rest of the Memorial Villages, as well as its eventual growth and and rise to prominence.

In the 1950s, the development of the I-10, along with Houston’s housing boom, sparked an interest in the Memorial Villages. Upper-middle-class subdivisions took root along the Buffalo Bayou and the rest of the area followed in earnest.

During the same period, Houston was expanding its borders to include surrounding areas. To circumvent this and to keep their mostly residential zoning, Bunker Hill and the rest of the Memorial Villages – Hunters Creek, Hedwig, Hilshire, Spring Valley, and Piney Point – filed petitions for incorporation.

Today, Bunker Hill operates as an independent city with a mayor-city council form of government. It has managed to maintain its largely residential zoning and country-living atmosphere through deed restrictions and zoning ordinances.

Bunker Hill luxury real estate reflects some of its history, as well as its progress toward newer homes. Like the rest of the Villages, Bunker Hill cannot expand beyond its 1.5-square mile area and so homeowners with older ranch-style homes are tearing down and building more modern homes.

Due to this trend, Bunker Hill homes for sale can range from ranch-style homes to more recent custom-built homes. Older properties are sometimes sold as is, though some of those still sell for more than $1,000,000. Other homes are updated to have modern luxuries and conveniences.

Typical of homes in the Memorial Villages, Bunker Hill homes sit on large, wooded, and sprawling lots, ranging from 18,000 to more than 80,000 square feet.

Among the most expensive neighborhoods in Texas, Bunker Hill Village has maintained its prominence and affluence over the years, and continues to be one of the most desirable areas in which to live in the vicinity.

Bunker Hill Village is under the 77024 Harris County zip code. 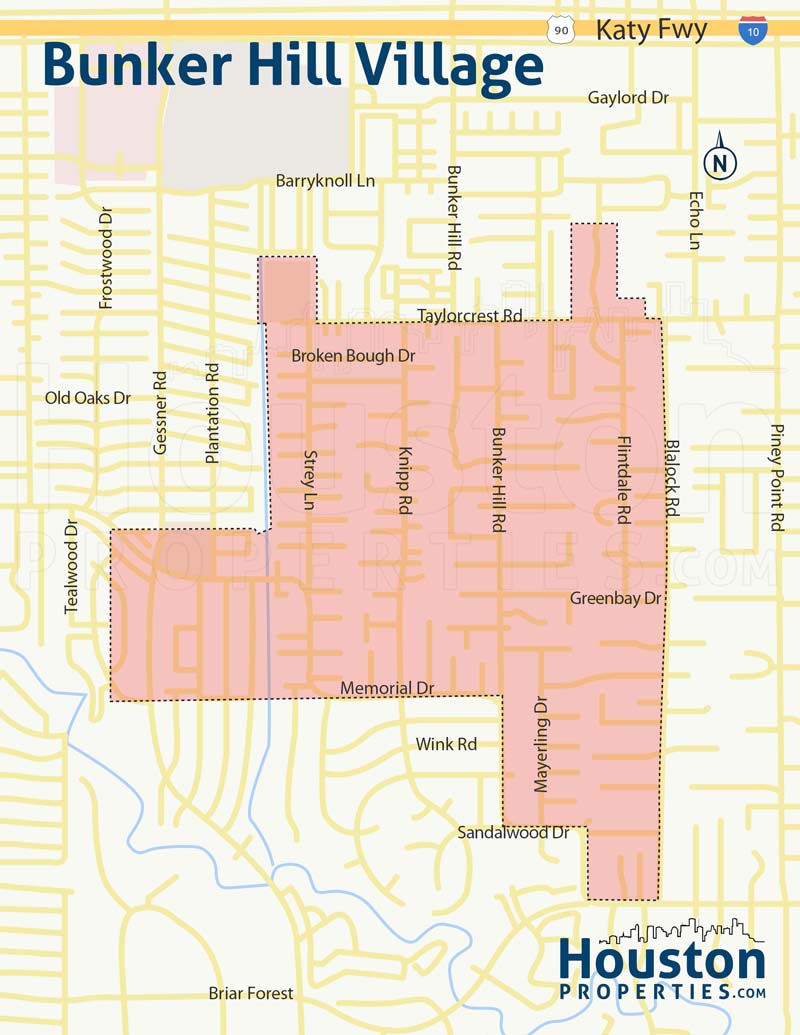 Bunker Hill: Fun Things To Do In The Neighborhood

Thanks to its location near the junction where Katy Freeway (I-10) and Sam Houston Parkway (Beltway 8) meet, there are plenty of things to do and see near Bunker Hill Village. Commercial establishments in Hedwig Village and Houston are also nearby.

The Galleria, a major retail and entertainment destination in Houston, is a short drive east of Bunker Hill Village. The Hedwig Shopping center is a few minutes away, while the Village Plaza at Bunker Hill is just across the freeway.

The Memorial City Mall, located along Katy Freeway, features JCPenney, Macy’s, Dillard’s, Target, and Sears. The CityCentre, on the other hand, is a located along Beltway 8. It is a relatively new, pedestrian-friendly mall that features several restaurants.

Here are just some of the must-visit places around Bunker Hill Village:

Paige is ranked as one of the top realtors in Bunker Hill Houston, and the state of Texas.

Paige works with a tremendous number of buyers and sellers in Houston, even earning praises like “Paige is the best Bunker Hill Houston realtor I know”. Read more about the over 65 awards she’s won in the last few years.