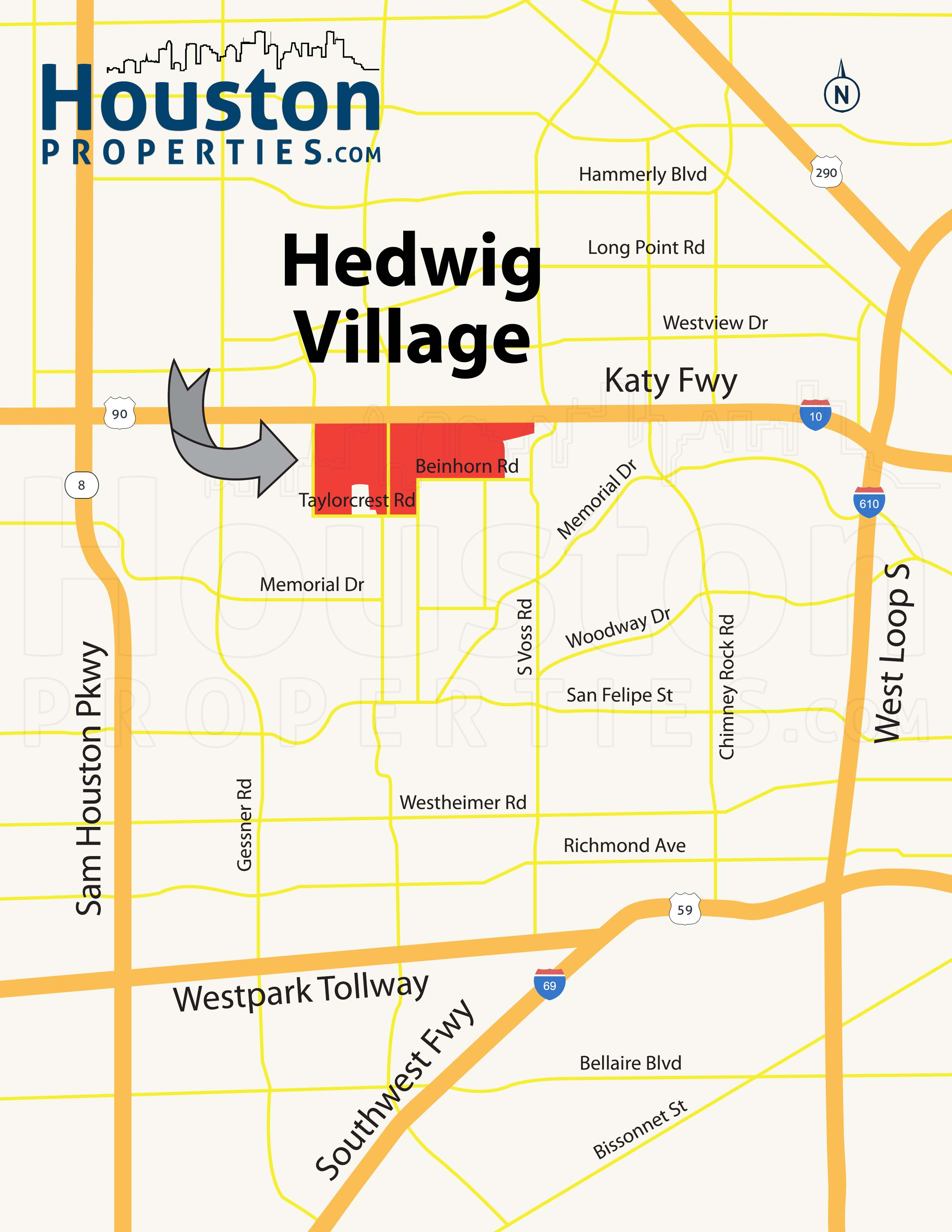 A tranquil enclave nestled at the heart of the Memorial Villages, Hedwig Village presents an interesting mix of old and new.

Hedwig features older ranch-style homes, though most of those are slowly being replaced with newer custom-built mini-mansions. Despite, and perhaps, because of these changes, Hedwig luxury real estate are in very high demand.

Located along the Katy Freeway, Hedwig is highly accessible to key Houston hubs. Downtown Houston, The Galleria, and the Medical Center are only a short drive away from the neighborhood. The Energy Corridor, a major business and employment center, is a few minutes west of Hedwig Village.

It is the only neighborhood among the Memorial Villages that allows construction of commercial establishments within its borders. Consequently, there are a number of shopping and dining options near Hedwig.

Another feature that draws homebuyers to Hedwig is its access to award-winning schools. The city is zoned to the Spring Branch Independent School District and is home to two National Blue Ribbon Schools: Memorial High School and Spring Branch Middle School.

Don’t see what you like?Get a custom list of the best homes for sale in Hedwig Village

Located along the Katy Freeway (I-10), Hedwig Village is one of the six independent cities collectively known as the Memorial Villages. The city has Hunters Creek to the east, Bunker Hill and Piney Point to the south, and Katy Freeway to the north. Hilshire and Spring Valley are just across the freeway from Hedwig Village.

Hedwig luxury real estate typically sit on large lots ranging from 12,000 to more than 20,000 square feet. Living areas are just as expansive, and luxury features can include island kitchens, outdoor kitchens, high ceilings, and sprawling front and backyards. Some homes feature multi-car garages and patios, and are elevator-ready.

Some of the most expensive Hedwig homes for sale are new construction, custom-built homes and prices can range from $1M to more than $2M.

Hedwig Village wasn’t always the upscale enclave that it is today. During the 19th century, the area in which the city now stands was a farm. Hedwig Jankowski Schroeder and her husband Henry owned the said farm. At one point, the German couple donated a part of their land for the construction of a road, which was then named Hedwig Road.

In the 1950s and 60s, development in the area picked up speed due to the construction of Katy Freeway and Houston’s suburban boom. During this period, Hedwig Village, along with the other Memorial Villages, sought to be incorporated, in an effort to preserve residential zoning and to avoid annexation by Houston.

In 1954, Hedwig Village was incorporated with a mayor-city council form of government. A year later, the city passed a zoning ordinance.

Today, the city of Hedwig Village operates its own police department. The Village Fire Department, which serves all six Villages, is located within the city. Hedwig is also under the Memorial Villages Water Authority. 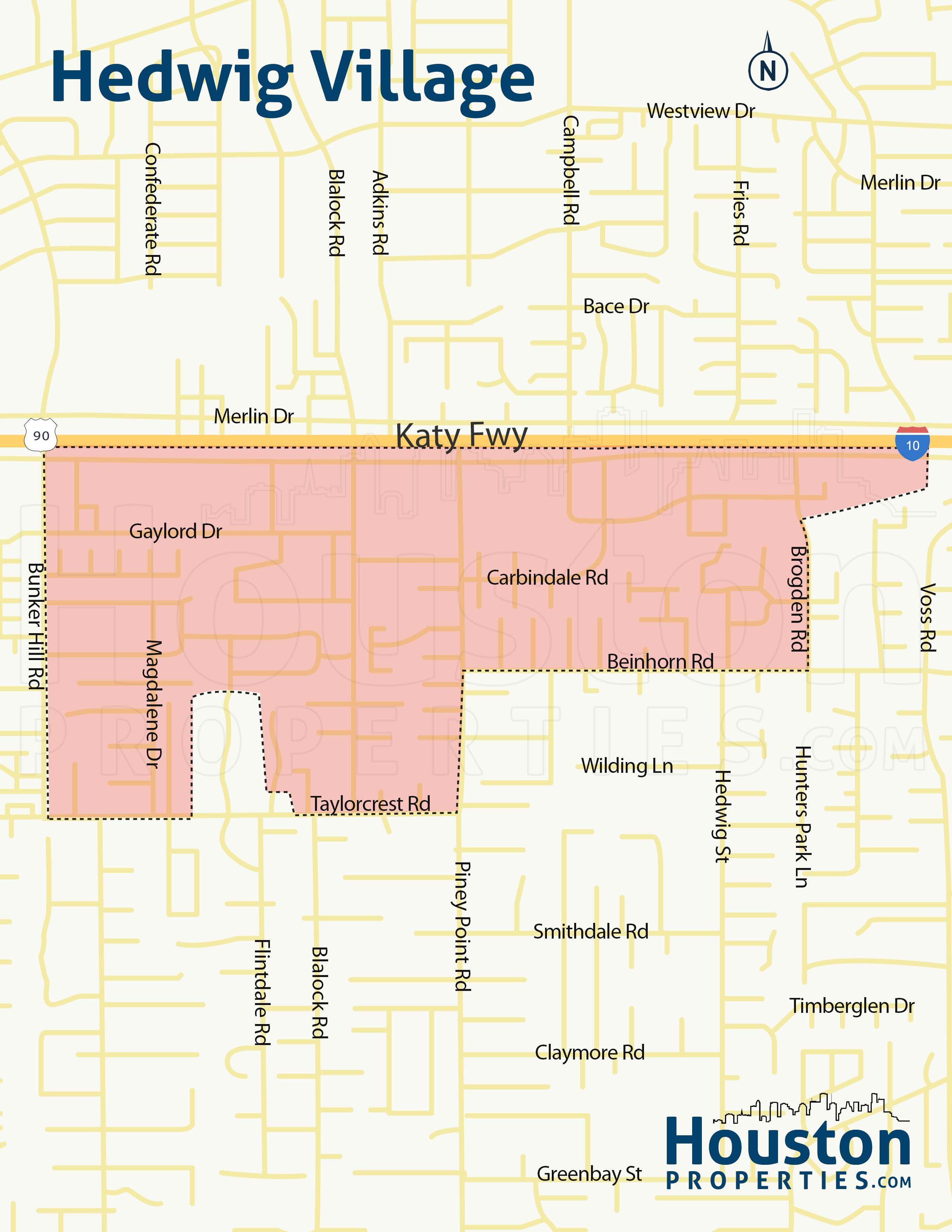 Hedwig Village is zoned to the Spring Branch Independent School District (SBISD). The city has a number of schools within its borders, including top-ranked Memorial High School and Spring Branch Middle School. Two private schools, St. Cecilia School and Duchesne Academy, are also located in Hedwig.

To find an updated listing of all Hedwig real estate zoned to any specific public school, please send an email to Paige Martin at [email protected] with the property preference and budget that you’re working with.

Paige is ranked as one of the top realtors in Hedwig Houston, and the state of Texas. Read more about the over 65 awards she’s won in the last few years.

Paige works with a tremendous number of buyers and sellers within the Memorial Area.