Known for its country-living atmosphere and vintage ranch-style homes, Hilshire Village is one of the six independent Memorial Villages.

Located north of the Katy Freeway, Hilshire Village is a quiet residential enclave about 10 miles west of Downtown Houston. Hilshire homes are in high demand due to the following:

There are very few Hilshire homes put on the market every year and the market can be very challenging. The city’s deed restrictions (can be an issue depending on your goals) and old homes (some may need extensive renovations) can also pose challenges. For help in navigating this challenging market, contact Paige Martin, one of Houston’s Best Realtors and one of Hilshire Village’s most active real estate agents.

Don’t see what you like?Get a custom list of the best homes for sale in Hilshire Village

One of the most desirable places to live west of Downtown Houston, Hilshire Village is an independent city within the Memorial Villages.

Hilshire Village is one of the two Memorial Villages located north of Katy Freeway (Interstate 10).

Adjacent to Spring Valley Village, Hilshire is the easternmost city in the Memorial Villages and with only 0.3 square miles of land area, it is also the smallest.

The neighborhood’s western borders follows the contours of a waterway called Spring Branch, while it has Westview Drive, Wirt Road, and Katy Freeway to the north, east, and south, respectively.

With convenient access to the I-10, Hilshire Village is minutes away from Sam Houston Parkway and Loop 610. Key Houston hubs like Downtown, The Galleria, Medical Center, and the Museum District are highly accessible from the neighborhood.

One of Houston’s key districts, Memorial City is around 15 minutes away from Hilshire Village homes. The mixed-use district features the Memorial City Mall (an shopping destination in the area since the 1960s) and the Memorial Hermann Memorial City Medical Center. Multi-family complexes, office spaces, and retail stores are also within the district.

More retail is available further west, along the Beltway. These include the CityCentre Plaza and Town & Country Village. 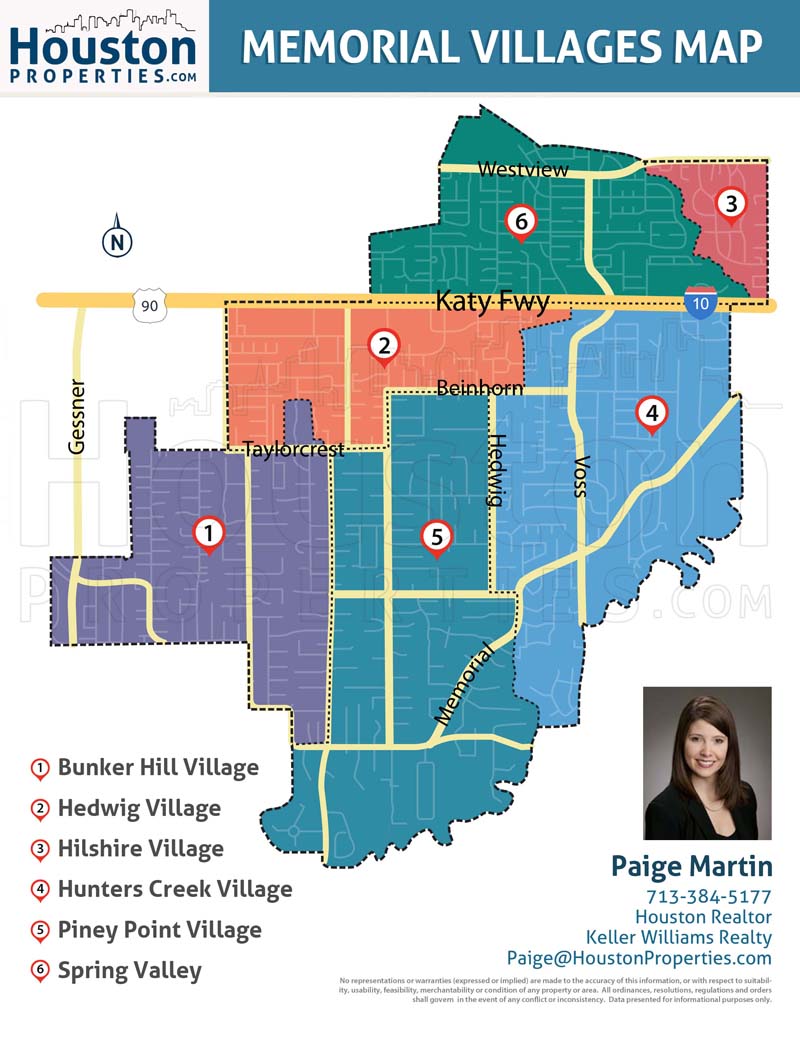 Spring Branch ISD is known for its multi-award winning schools, most of which have been named National Blue Ribbon School. Headquartered in Hilshire Village, the SBISD received a “Met Standard” accountability rating from the Texas Education Agency in 2016.

The following are some of the more notable private schools near Hilshire Village.

To find an updated listing of all Hilshire Village real estate zoned to any specific public school, please send an email to Paige Martin at [email protected] with the property preference and budget that you’re working with.

Historically, there have been less than two dozen Spring Valley home sales per year and less than one dozen Hilshire Village homes sold per year.

On average, Hilshire Village and Spring Valley homes sell at a 5-15% discount (based on an average price per square foot) to home sales in Bunker Hill, Hedwig, Hunters Creek or Piney Point Villages.

Given the limited data set for these two Memorial Village properties (since we didn’t want to display non-statistically significant information), we’ve displayed pricing trends for ALL Memorial Village homes below.

Please note that this data above overstates the average and median pricing for Hilshire Village and Spring Valley.

Email me with any questions, or for more information on pricing trends, or specific property recommendations in Memorial Villages.

Its zoning ordinance is responsible for keeping the look and feel of the neighborhood, and as a result, single-family homes are Hilshire’s main housing attraction.

Like most of the Memorial Villages, a teardown trend is also slowly replacing old Hilshire Village homes with newer construction custom-built homes. Others are updated and carefully maintained.

Hilshire homes feature a number of architectural sensibilities, including Contemporary, Traditional, and Ranch, among others.

As mentioned, Hilshire homes are typically detached single-family dwellings due to the city’s zoning ordinance.

This is a common trait among the Memorial Villages, though Hedwig does have a few older multi-family buildings. A number of townhomes can also be found on the the fringes of Bunker Hill Village.

Hilshire Village’s zoning ordinance discourages multi-family dwellings like condos and complexes. However, there are plenty of mid-rise and high-rice condos in Houston, including ones in the Memorial area. Units in The Galleria and the Museum District are also quite popular.

Here are a few condos located near Hilshire:

In 1940s, Frank Bruess, along with his mother, purchased about 30 acres of land in what is now known as Hilshire Village. Bruess saw Houston as burgeoning city, and moved his family there from his native Missouri.

As the story goes, the name Hilshire came from an article about Hillshire, a country estate in England that Bruess chanced upon while on a business trip. Hilshire Village eventually won over two other names considered for the budding development.

Hilshire’s first home was that of Bruess’ mother, on the neighborhood’s first street, Pine Chase.

Some years later, Houston was looking to expand toward the area beyond Wirt Road. As a response, notably because of fears over high taxes and the lack of zoning laws, concerned residents filed a petition for incorporation.

Hilshire was incorporated in 1955, with a mayor-city council type of government.

Apart from improved city services and roads, nothing much has changed in Hilshire Village. The neighborhood encapsulates traits for which the Memorial Villages are best known: tree-lined streets and wooded lots, elegant homes, and a distinct country-living atmosphere.

Fun Things To Do Near Hilshire Village

With a number of retail, dining, and entertainment centers within driving distance, Hilshire Village residents have a plenty of options from which to choose.

Memorial Park, one of the largest urban parks in the country, is about 15 minutes away from Hilshire Village. The vast 1,466-acre park features a number of nature trails, picnic grounds, and biking and jogging paths, an 18-hole municipal golf course, and the Houston Arboretum and Nature Center. The Memorial Park Golf Course has a course rating of 73 and a slope rating of 122.

For retail options, The Galleria, the Memorial City Mall, the Northwest Mall, and the CityCentre are minutes away from Hilshire homes. Retail stores and shops abound in nearby Spring Branch and Hedwig Village as well.

Here are some of Hilshire Village Texas must-visit places: