Spanning just over 67 acres, Royden Oaks Houston is one of the best neighborhoods in the vicinity of the prestigious River Oaks.

Aside from being one of the most accessible Houston neighborhoods, it also offers the many conveniences that River Oaks offers.

Royden Oaks homeowners enjoy being just a few-minute stroll to the bustling retail options and exceptional restaurants of nearby Highland Village. The Galleria, River Oaks Shopping Center, and Greenway Plaza are all less than a 10-minute drive from the neighborhood.

A public library, parks, and numerous pocket gardens are just few of the many recreational areas Royden Oaks residents can visit. Crape myrtles lining Willowick bloom every summer, adding shades of pink, red, and lavender to the lush greenery.

Royden Oaks properties are always in high demand. Its land value has increased by 200% in the past decade. With the constant low inventory, finding the best Royden Oaks Houston realtor familiar with the area will help you secure your Royden Oaks dream home.

NOTE: Royden Oaks homes are among the fastest selling real estate in Houston. Some of the properties are off-market (not publicly listed). For more information on available Royden Oaks homes for sale call Paige Martin at 713-425-4194 or email [email protected]

Don’t see what you like?Get a custom list of the best homes for sale in Royden / Afton Oaks

Guide To Royden Oaks Homes For Sale Under $750k

This peaceful enclave is bordered by Westheimer Road to the south, San Felipe Road to the north, Willowick Road to the west, and Timber Lane to the east.

The neighborhood is just a few minutes from the West Loop and Southwest Freeways, and many major thoroughfares such as Westheimer Road, Kirby Drive, and San Felipe Street.

Royden Oaks subdivision is a favorite among families who wish to enjoy the Inner Loop convenience of being near both work and leisure.

While Royden Oaks homes for sale are among the more expensive properties in Houston (Royden Oaks is one of Houston’s 20 most expensive neighborhoods), buyers can still get homes that rival River Oaks luxury real estate for less.

Posh new constructions have been changing the Royden Oaks real estate market for the past 10 years. More than a third of the older homes have already been replaced with stunning 2-story luxury homes.

These new constructions easily sell for over a million, but there are quite a few gems you can find for under $750k. Homes in this price range tend to be older but have been recently updated. Living areas tend to be below 2,500 square feet, with lot sizes generally under 7,500 square feet.

Royden Oaks homes also tend to sell well, averaging just under a month in the market. It is normal to see very few homes up for sale, but there are off-market options. 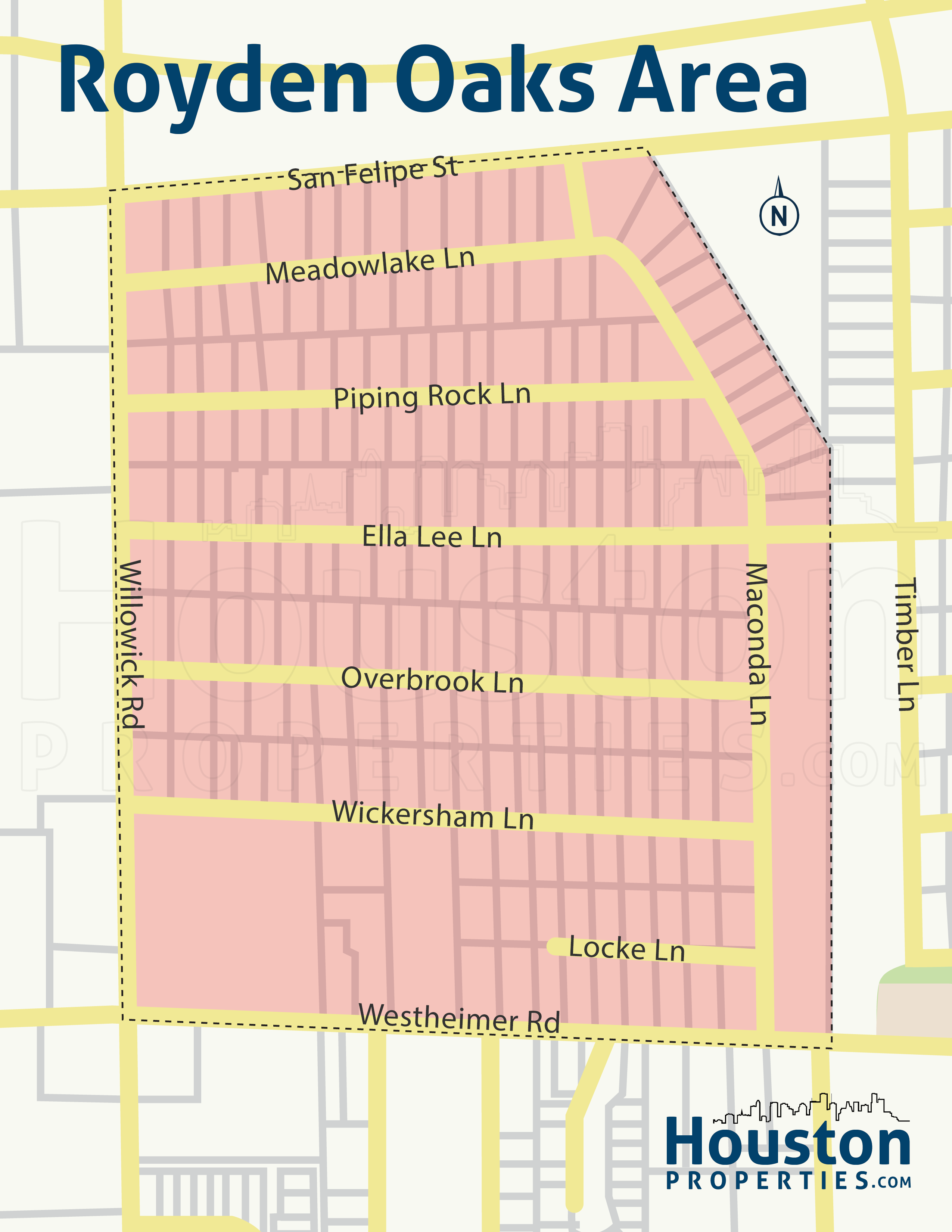 The Houston Independent School District (HISD) runs the schools zoned to Royden Oaks. These public schools are some of the best in the city, and offer high-quality education comparable to the exemplary private schools nearby. Elementary Schools

St. John’s School at the corner of Claremont Lane and Buffalo Speedway is one of “America’s Elite Prep Schools” according to Forbes.com and “the best private school in Houston” according to the New York Times. It has a GreatSchools.org community rating of 3/5 stars.

Paige is ranked as one of the top realtors in Royden Oaks Houston, and the state of Texas. Read more about the over 65 awards she’s won in the last few years.

Paige works with a tremendous number of buyers and sellers within the Inner Loop. For a specific recommendation of neighborhoods, homes or properties based upon your personal style, goals & price point, please contact Paige Martin, head of the Houston Properties Teamm & Broker Associate at [email protected] or 713-425-4194.