Part of the area known as Greater Heights, Shady Acres covers the area along the northwest of Loop 610. Shady Acres is within one of Houston’s Most Accessible Neighborhoods. Residents enjoy:

Shady Acres real estate can be challenging to navigate because of homes near or along main roads (which can hurt resale values), the diversity of home builders (some have great quality track records, but others do not), and the lack of zoning (which can present some noise issues).

For help in navigating this tricky market, contact Paige Martin, one of Houston’s Best Realtors and one of Shady Acres’ most active real estate agents. 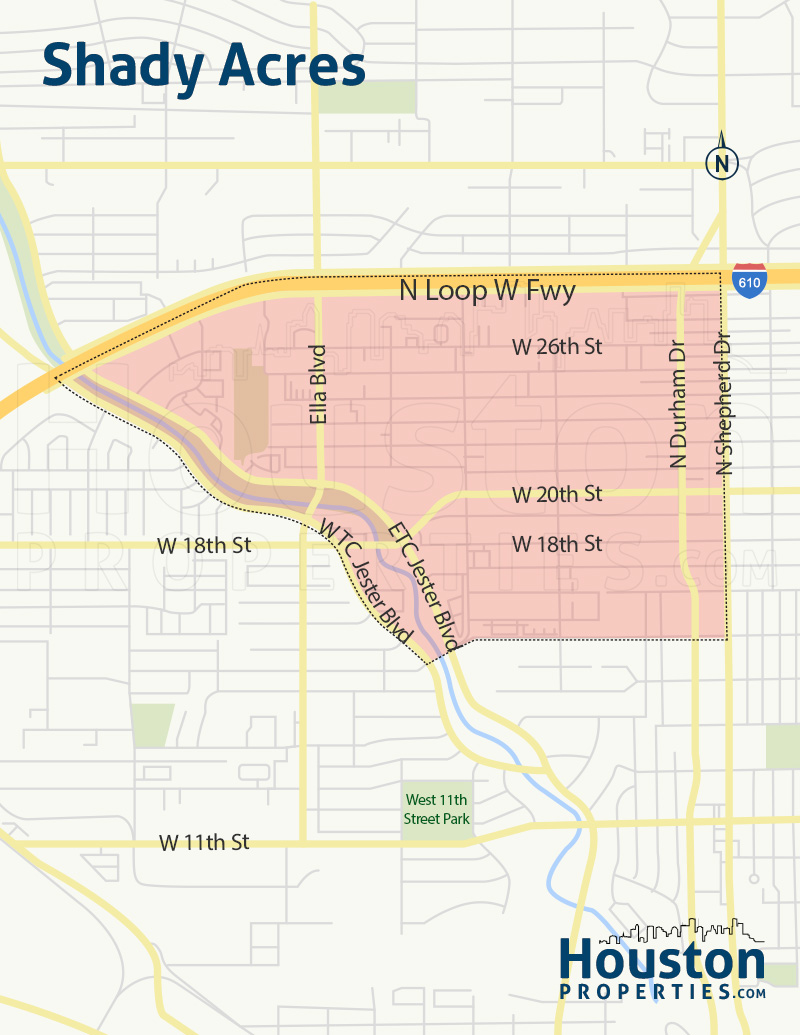 Don’t see what you like?Get a custom list of the best homes for sale in Shady Acres

Nestled south of Loop 610, Shady Acres is a mixed-use neighborhood. The area is part of the Greater Heights, just west of the Houston Heights.

Located in the Inner Loop’s lush northwest area, Shady Acres is a mixed-use neighborhood. The neighborhood is part of the bigger Greater Heights area.

The neighborhood is bordered by TC Jester Boulevard to the west, Loop 610 to the north, N Shepherd Drive to the east, and W 15th Street to the south.

The Houston Heights is east of Shady Acres, while the Lazybrook/Timbergrove area is nestled to the southwest, just across the White Oak Bayou. Oak Forest and Garden Oaks are across the loop to the north of the neighborhood.

Thanks to its relatively central location, Shady Acres homes have great access to key Houston roads and freeways. Residents have convenient access to TC Jester Boulevard, Loop 610, US 290, Ella Boulevard, and Shepherd Drive.

Key business and employment districts like the Galleria and Downtown Houston are minutes away from Shady Acres homes.

Residents have plenty of dining, retail, and entertainment options to choose from. Several restaurants, retail stores, bars and cafes line 19th Street and Shepherd Drive. Lazy Brook (a strip mall) and Jester Village Shopping Center are both nearby, located along W 18th.

The following are some of the more notable private schools near Shady Acres.

To find an updated listing of all Shady Acres real estate zoned to any specific public school, please send an email to Paige Martin at [email protected] with the property preference and budget that you’re working with.

Shady Acres real estate is among the most affordable in the Inner Loop. Even so, property prices are on a steady rise. The median sales price has increased by more than half over the past decade, but is still relatively more accessible than in other Inner Loop neighborhoods.

This can be attributed to several factors, including the number of new developments in the area. High demand has led to developers buying old homes and tearing them down in favor of new construction townhomes and patio homes.

Like most subdivisions within the Greater Heights area, the multi-level living trend has swept through Shady Acres. Lot sizes have decreased, as some of the neighborhood’s older homes have been converted into townhomes.

Prices vary depending on location, size, and age of the home. Older and smaller homes can sell for around $250,000, while the most expensive Shady Acres real estate can go for more than $950,000.

Like in nearby Garden Oaks, a number of new construction townhomes have been built in Shady Acres. Increased demand for homes in the area led to developers buying up land and building custom-built townhomes. Some of these properties are within gated communities while others are tucked into cul-de-sacs.

Shady Acres townhomes typically sit on smaller lots, ranging from 1,500 to about 5,000 square feet. Floor plans vary, but 3-bedroom with 3-and-a-half-bath options are common. These multilevel homes typically feature two- to three-stories, with living spaces of around 2,000 to 2,700 square feet.

Most Shady Acres townhomes for sale are newly constructed, and prices can start at around $300,000. The most expensive units can go up to just under $500,000.

There are no residential condominium buildings in Shady Acres, but nearby neighborhoods like the Houston Heights, Memorial Park, and the Rice Military area have a number of condos available.

Like Lazybrook and Timbergrove Manor, Shady Acres started out as a heavily wooded area. The neighborhood was named for the soaring shade trees that canopied the land.

Development started sometime in the 1920s, when the Shadyacres Investment Company purchased 100 acres from the Henry Reinermann Original Grant. The land was subdivided into one-acre lots and smaller parcels. At the time, Shady Acres was advertised as a close-in area with oversized lots.

In the 1930s, oil was discovered in a neighboring area. Workers from the Eureka Oil Field moved into the surrounding neighborhoods, and a rail station was built as well.

In 1935, the Shady Acres Civic Club was founded. The SACC was instrumental in petitioning for bus service and city postal services, as well as dealing with the nearby oil drillers in behalf of the community.

Today, Shady Acres is a great neighborhood featuring a mix of old and new homes.

Fun Things To Do Near Shady Acres Houston

Shady Acres homes are mere minutes away from dining, retail, and entertainment hotspots. Its Inner Loop location provides excellent access to key Houston districts like the Galleria, Memorial Park, and Downtown. There are, however, plenty of options much closer to home.

There are two parks in Shady Acres, the Little Thicket Park and Wright-Bembry Park. Little Thicket Park on W 23rd Street is a 10.6-acre green space and a designated wildlife habitat. It was originally named Helberg Park, after the estate from which the land was from. After its renovation and subsequent renaming, the park features a walking trail and picnic areas.

Wright-Bembry Park, on the other hand, is also located on W 23rd Street. It was named for two school teachers, Lillie B. Wright and Nettie Bembry. Planned renovations will add walking trails to the park’s existing amenities which include a tennis court and a playground area.

For retail and dining, Shady Acres residents have options within the community, though for more options, Rice Military/Washington Avenue and Houston Heights are mere minutes away.

Here are some must-visit places in Shady Acres Houston: