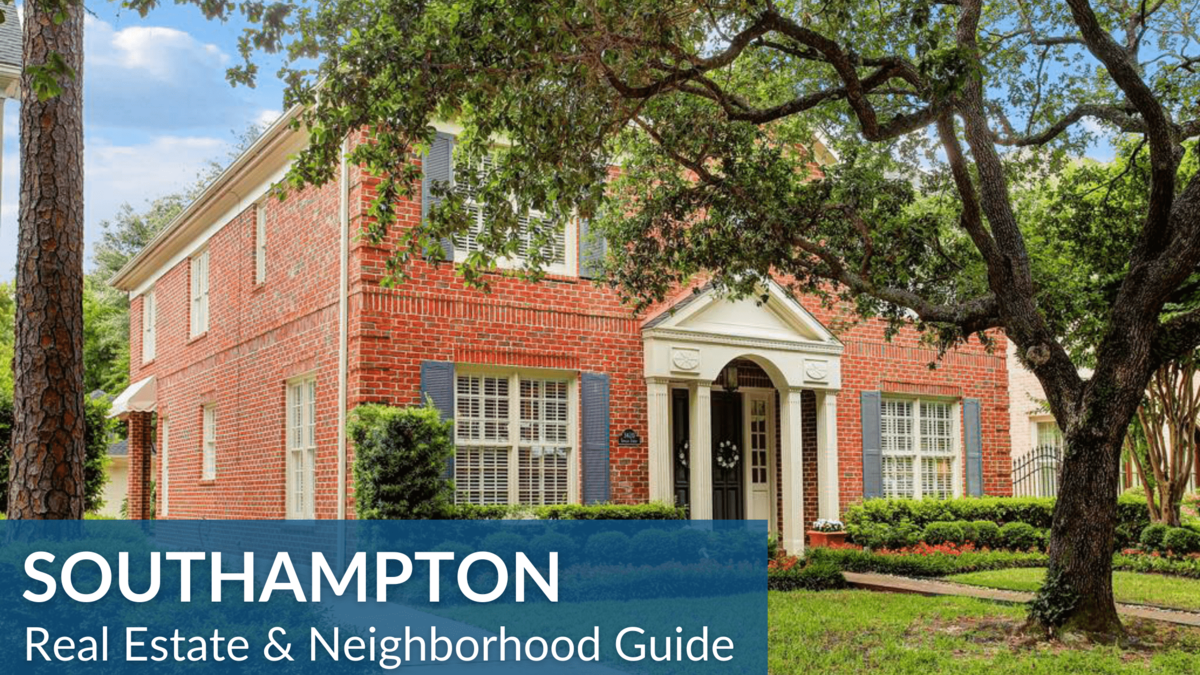 Southampton Place is an affluent and premier residential neighborhood. Southampton is located about 5 miles southwest of Downtown Houston. The upscale homes and vintage bungalows are among the Most Desirable in Houston's Inner Loop. The neighborhood features high accessibility, excellent entertainment, and top-ranking schools.

Southampton Place homes are popular thanks to their:

Southampton Place features proximities to most of the Houston hubs and the Inner Loop. Navigating the area might be very challenging and tricky. This is because of the community's popularity and strict deed regulations that may present a few speed bumps.

To get personal advice on buying or selling a Southampton Place home, contact Paige Martin. One of Houston's best realtors and one of the top-ranked Realtors in the United States. 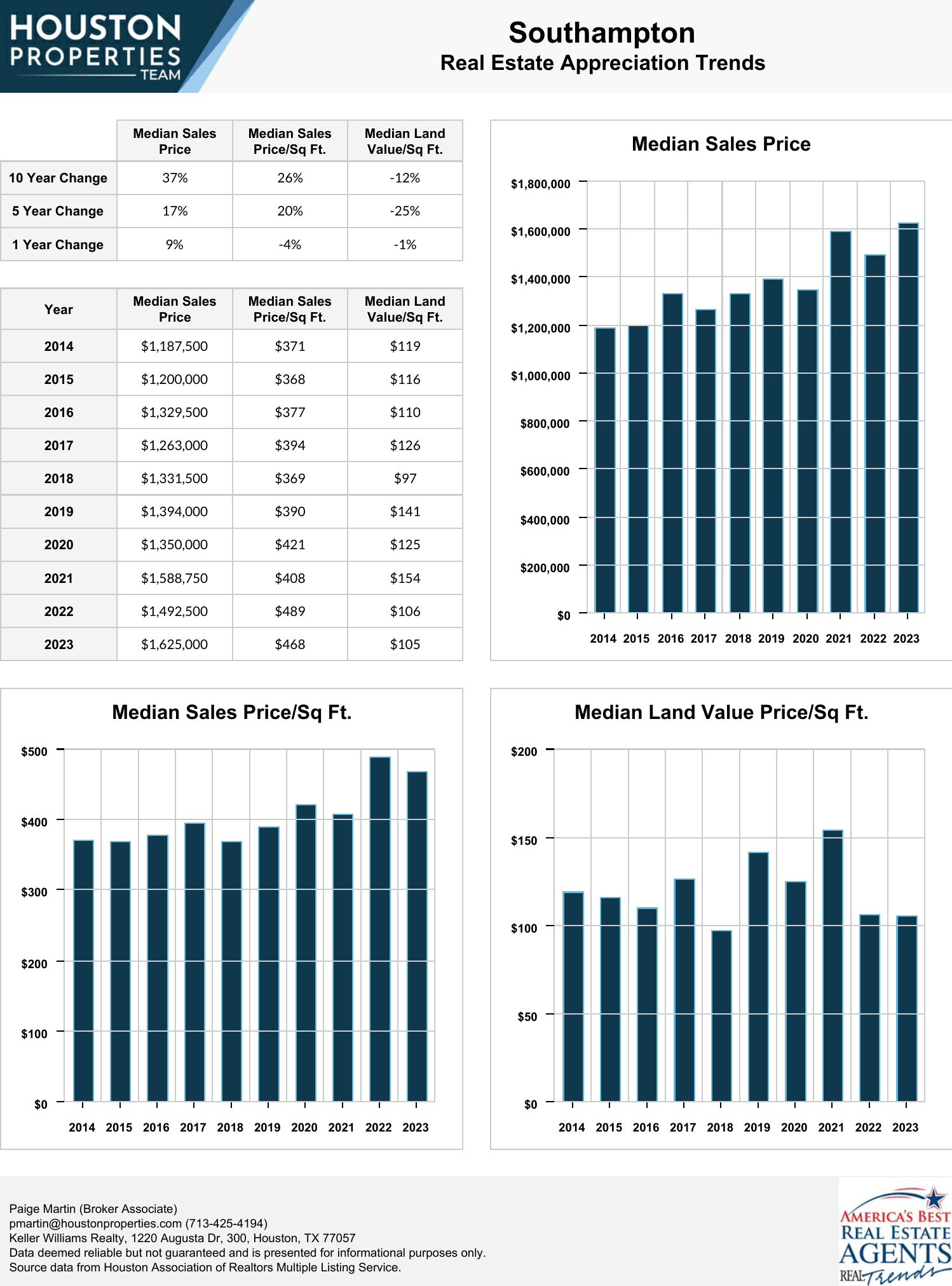 Southampton is one of Houston’s most expensive neighborhoods and one of the 14 Hottest Inner Loop Neighborhoods in real estate appreciation.

Established in 1923, the community consists of 626 upscale, single-family home sites protected by strict deed restrictions and architectural guidelines, thanks to an active civic club aimed at maintaining the identity and integrity of the neighborhood.

One of Houston's most expensive neighborhoods, Southampton Place is known for its tree-lined streets, upscale homes, and great atmosphere. 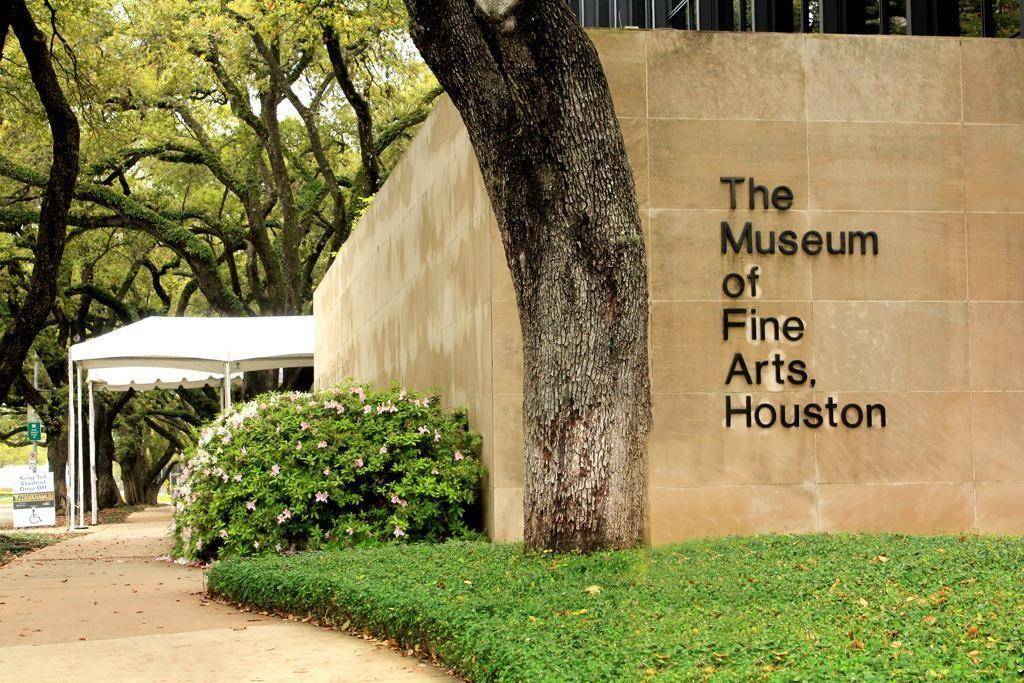 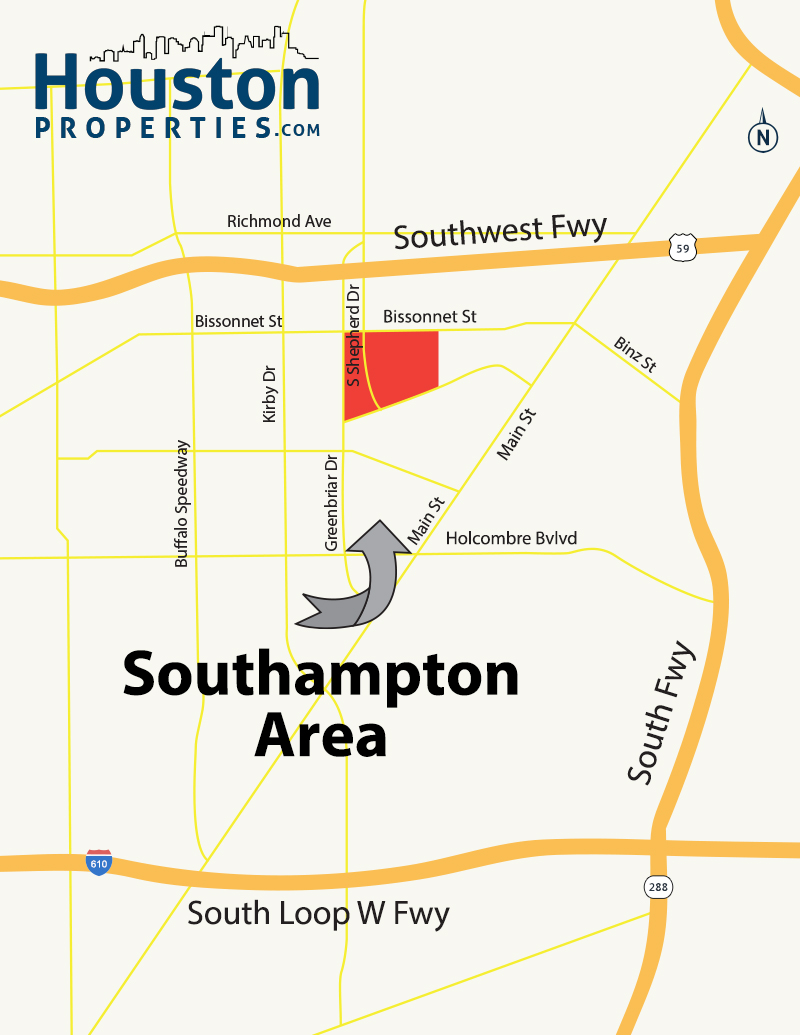 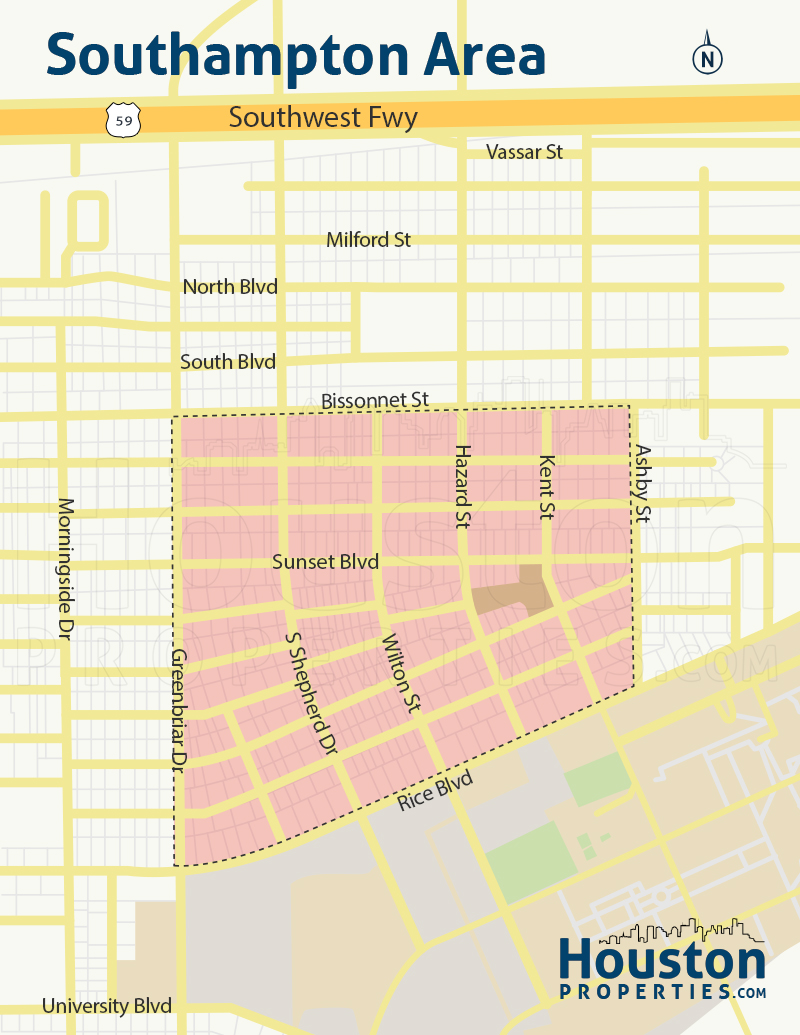 The following are some of the more notable private schools near Southampton Place.

To find an updated listing of all Southampton Place real estate zoned to any specific public school, please send an email to Paige Martin at PMartin@HoustonProperties.com with the property preference and budget that you’re working with.

*Note: School zoning tends to change from year to year. The information provided above is accurate but not guaranteed. Please double-check by visiting the School’s website. 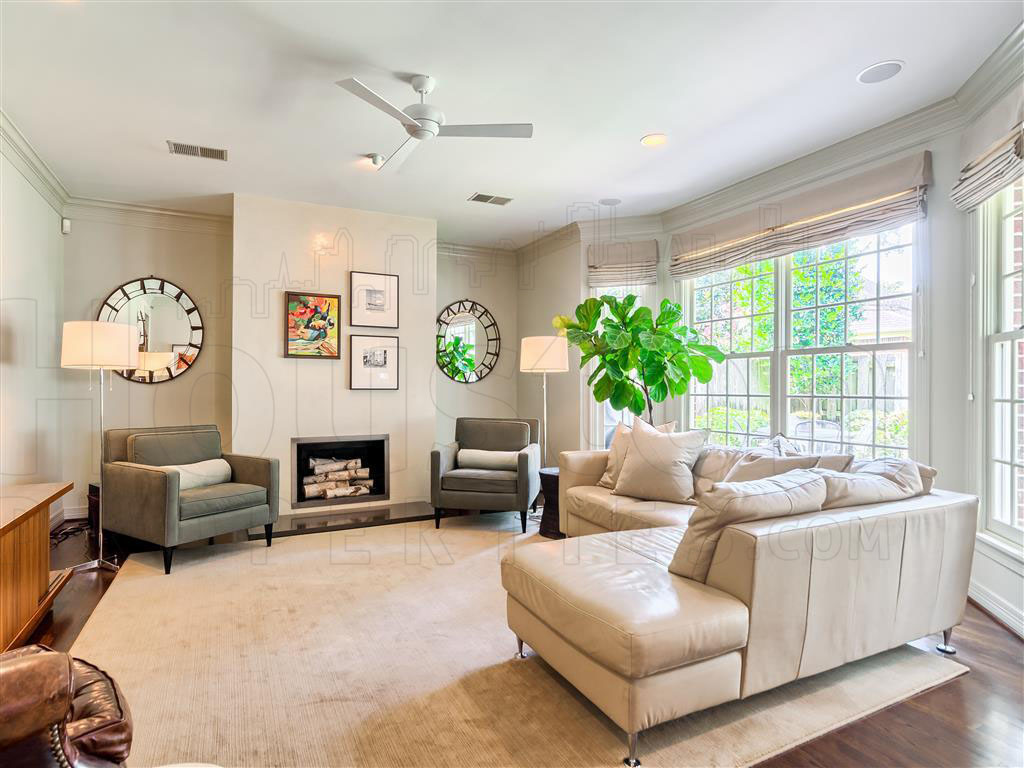 Southampton Place is made up of over 600 single-family homes. The neighborhood's deed restrictions allow properties to be used as single-family dwellings. Limited to 2 ½ floors and with wide setbacks.

Floor plans vary, though homes in Southampton Place typically offer 3 to 5 bedrooms spread over 1,500 to more than 5,500 square feet of living space.

Southampton offers a glimpse of the 1920s and 1930s era with its vintage brick cottages. Contemporary, Mediterranean, and Georgian are also common home styles in the area. New construction homes tend to feature more modern designs. Most still lean toward traditional aesthetics.

Many homes in Southampton Place were built before the days of air conditioning. Commonly have large wooden windows and side porches. Notable architects Salisbury and McHale designed many of the fine houses in the neighborhood.

Compared to the rest of Harris County, the Southampton Place real estate inventory tends to move quickly. Inventory is often low, and homes get sold quickly. 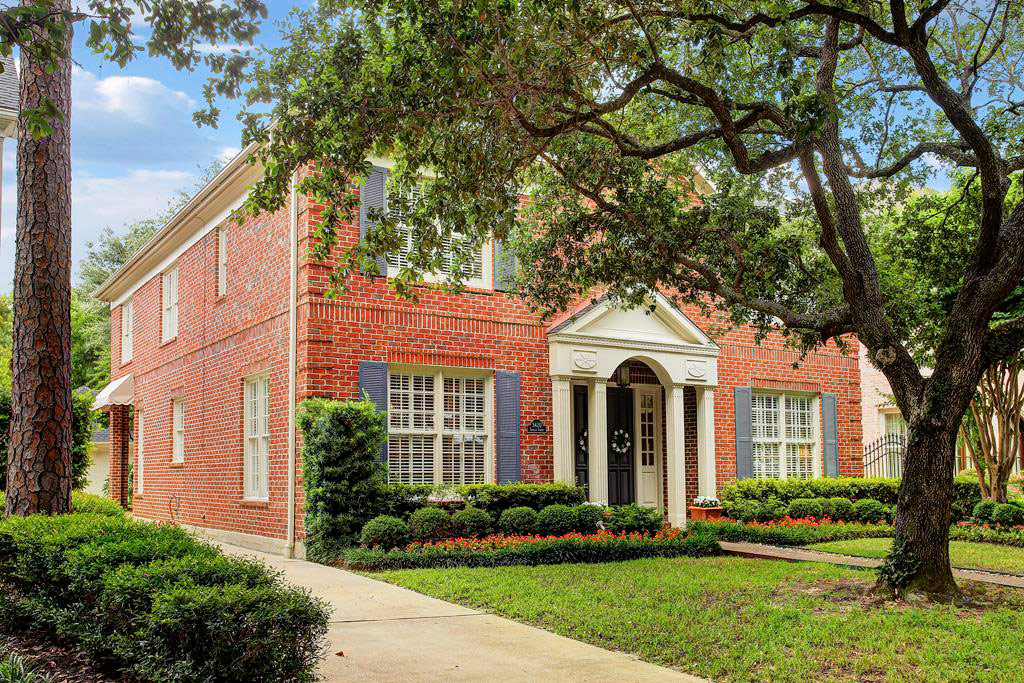 The neighborhood is a strictly single-family enclave, and there are no Southampton Place townhomes for sale. The nearest townhome community is Southampton Homes, along with Southampton Estate.

Other townhome communities in 77005 include:

Southampton's Place deed restrictions also discourage condos in the area. There are, however, plenty of residential mid-and high-rise buildings in surrounding neighborhoods. Condos are available in the Museum District, River Oaks, and River Oaks.

Southampton Place was developed in 1922 by E.H. Fleming as a residential and business community.

It was incorporated into the City of Houston the following year, and Southampton deed restrictions were drafted. One of its rules stated that there were to be no apartment houses or duplexes built within the neighborhood.

In 1929, the Southampton Civic Club (SHCC) was established to preserve the neighborhood's deed restrictions. The deed restrictions have been updated through the years. The association has been a big driving force in keeping Southampton a single-family residential area for over 85 years.

The SHCC promotes the preservation of the neighborhood. They have been active in developing Houston ordinances such as off-street parking and permit parking.

They were also instrumental in preserving the beautiful oaks lining the Southampton streets. Back when the new water lines were installed under city streets in 1972.

Southampton is also famous for its heavily-enforced deed restrictions. Alley access at the back of homes helps keep cars and trash off the streets and provides more space in their front yards.

Southampton is part of the University Place Association. It is an organization of area neighborhoods, businesses, and institutions that aim to promote civic goals.

Fun Things To Do Near Southampton Place Houston

Fleming Park at Dunstan and Kent houses two full tennis courts and a playground. There is also a pavilion where various community activities take place. The well-kept asphalt streets and bike lanes are a favorite for Houston inline skaters and cyclists.

Southampton Place Houston has a WalkScore of 82 of 100, making it one of the most walkable neighborhoods in Houston. Though there are few public transportation options in the area, it rarely is an issue as most errands can be accomplished on foot.

Sunrise Grocery, a convenience store that used to be a gas station, is a familiar view along Bissonnet. The British Isles is just outside the neighborhood along Rice Boulevard and is a favorite for many Houston consumers craving some English fare. 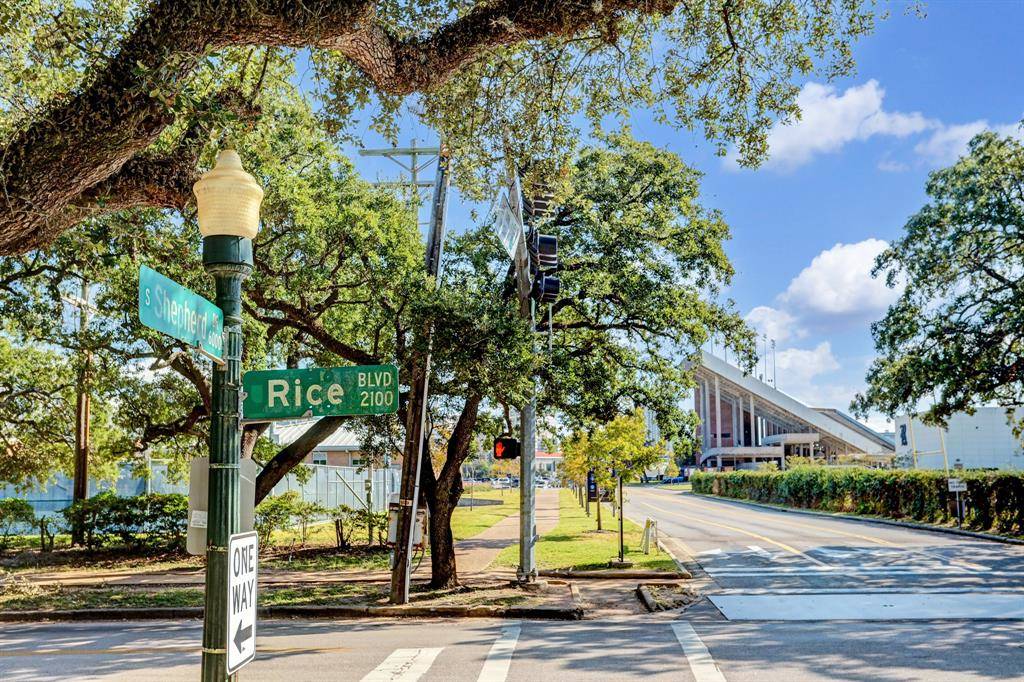 Mercantile, a part grocer and coffee bar, is just a 10-minute walk from Southampton. It is currently one of the hottest coffee shops in the country, according to Eater.com.

Daily commutes are made easy by the Memorial Hermann station of the METRORail Redline. Buses are also plying on Shepherd Drive, Bissonnet Street, and Greenbriar Drive.

Here are some of Southampton Place Houston's must-visit places: