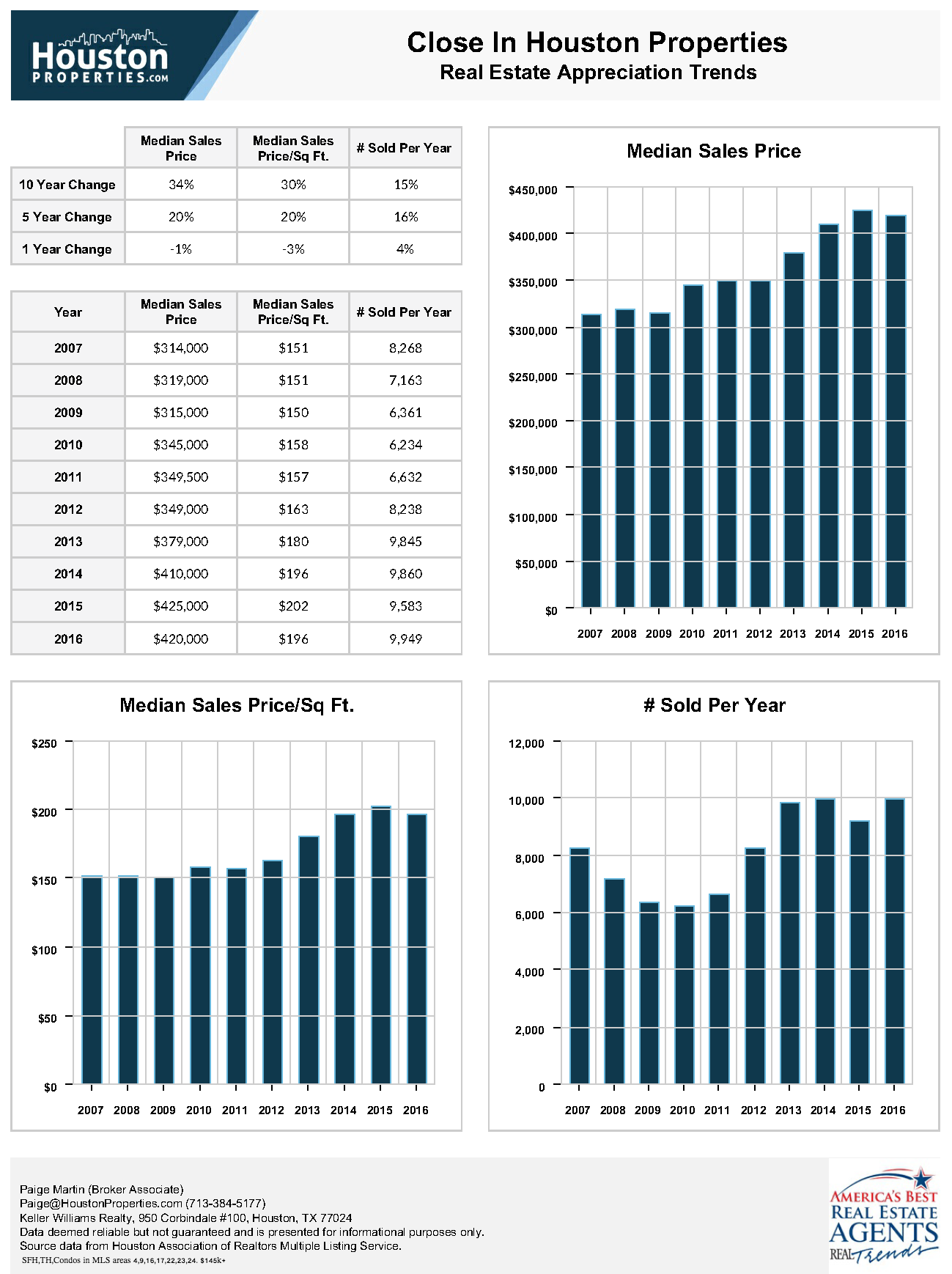 Get a customized copy of the trend graph above for your neighborhood here.

According to the most recent Houston real estate sales data, Houston-area realtors sold a record number of properties in 2016.

Despite the slowdown due to falling oil prices and resulting energy industry layoffs, the Houston housing market held steady throughout the year. The market gained momentum in the final months of the year (especially in December), setting a new record for home sales.

While the numbers provide a good overview, a deeper look at Houston Real Estate Data By Housing Segments shows that the numbers are anything but “average”.

Netting a 3% increase in single-family home sales, 2016 was a record year for Houston real estate.

To see a custom report on your neighborhood trends, contact Paige Martin – one of the top ranked Realtors in the United States.

Get A Custom Home Valuation Report

See How My Neighborhood Is Doing

While many economists predicted a slowdown during 2016 (thanks to falling oil prices and layoffs), the rebound the energy prices during mid-year 2016 sparked a resurgence in the market, especially gaining momentum (and setting records) during the 4th quarter of 2016. Note: much of the following text originates from the Houston Association of Realtors Newsroom.

Homes priced at $500,000 and up, which experienced declining sales from August 2015 through October 2016 as a result of the energy slump, achieved an impressive turnaround with double-digit sales increases in November and December.

Full-year 2016 single family home sales totaled 76,449, according to the latest report produced by the Houston Association of Realtors (HAR).

The single-family home median price (the figure at which half of the homes sold for more and half sold for less) rose 2.7 percent to $225,903 That marks the highest median price ever for a December. The average price increased 4.3 percent to $294,512, which also represents a December high.

“Paige is simply amazing! Paige is a customer service driven agent that doesn’t let any small details slip past her. She is meticulous with her offers, inspections, and knows how to effectively negotiate the right price for her buyers and sellers”
– William Swallen

When 2015 segued to 2016, home sales had been on the decline as plummeting oil prices and energy layoffs sparked jitters throughout the Houston economy. But the housing market demonstrated resiliency, with sales up during all but three months of 2016. By the end of December, a record 76,449 single-family homes had sold. That represents an increase of 3.0 percent from 2015 and is up 1.3 percent from the previous record of 75,470 home sales set in 2014.

Month-end pending sales for single-family homes totaled 4,746, an increase of 11.7 percent compared to last year. Total active listings, or the total number of available properties, rose 7.1 percent from December 2015 to 33,802.

Single-family homes inventory grew fractionally from a 3.2-months supply to 3.3 months. For perspective, housing inventory across the U.S. currently stands at a 4.0-months supply, according to the latest report from the National Association of Realtors (NAR).

* Months inventory estimates the number of months it will take to deplete current active inventory based on the prior 12 months sales activity. This figure is representative of the single-family homes market.
** Effective May 2015, in an effort to be consistent with industry standards, the Houston MLS is now including all categories of pending sales in its reporting. Previously, the Houston MLS did not include “option pending” and “pending continue to show” listings in its reporting of pending sales. The new methodology is now all-inclusive for listings that went under contract during the month.

Broken out by housing segment, December sales performed as follows:

HAR also breaks out the sales figures for existing single-family homes. Existing home sales totaled 5,345 in December, up 6.4 percent versus the same month last year. The average sales price rose 5.4 percent to $270,731 while the median sales price jumped 7.2 percent to $209,000.