Houston is the fourth largest city in the United States. The oil and gas industry is a major contributor to the economy of the area, and the city is known for an outstanding skyline, defined by the remarkable skyscrapers constructed by some of the largest corporations the United States (and the world). The city is also home to a number of highly-acclaimed research and medical centers.

Houstonians enjoy a wide, year-round variety of various cultural activities. The city has some of the best museums in the nation, and is home to a number of excellent opera and ballet companies. Many other entertainment options are available, from a tour of the famous Johnson Space Center to the annual Houston Livestock Show and Rodeo. 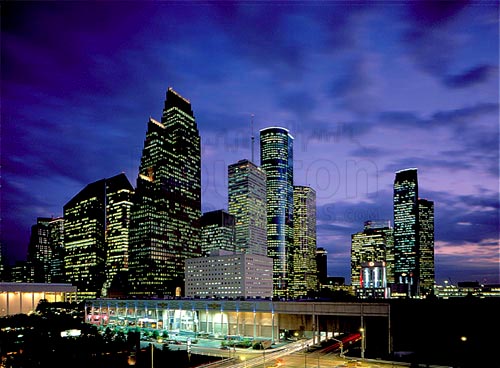 Houston has many lodging choices and is a major destination of choice for conventions. With literally thousands of excellent restaurants abounding in all parts of the city, visitors are delighted to find a remarkably wide assortment of dining options. Houston also boasts some of the lowest dining prices in the nation.

Neighborhoods in Houston Texas:
A large portion of Houston, Texas is composed of residential suburbs located outside the main perimeter of town. This page focuses on neighborhoods that are attractive to visitors in the way of restaurants, entertainment, and choice hotels.

Downtown Houston:
The Downtown Tunnels, a system of air-conditioned tunnels that connect 82 buildings, are home to a wide variety of shopping. More than 100 cafes, galleries, restaurants and shops line the tunnels.

Central Houston:
With the exception of Downtown and the Post Oak District, Central Houston is composed of the area inside the boundary of Highway 610 Loop, which includes a number of communities. The streets of the exclusive River Oaks neighborhood are lined with impressive mansions. River Oaks also contains many restaurants, galleries, nightspots, and theaters. The Upper Kirby District has a patently British feel with antique red English phone booths lining the streets and a unique collection of shops and restaurants. Montrose is the place to be on a Friday or Saturday night, with an eclectic mix of hotels, shops, galleries, and restaurants. University Village, home to the prestigious Rice University, has the usual assortment of shops, cafes, and nightspots that are popular with the college crowd.

Post Oak District:
The Post Oak District’s main attraction is the enormous Galleria, Houston’s premiere shopping mall, which has numerous high-end department stores such as Gucci, Neiman Marcus, Saks Fifth Avenue, Tiffany & Company, and over 300 other shops plus a wide variety of dining venues. There are many more shops and top-notch restaurants nearby which serve to enhance the shopping experience.

Greater Houston:
The area outside the perimeter of the Highway 610 Loop is known as Greater Houston. It includes much of the city’s residential areas, the University of Houston, and the two airports. The Greater Houston area also features attractions such as the Orange Show.